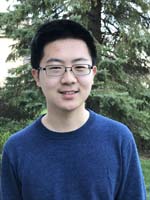 I have been participating in math competitions almost as long as I can remember, but nearly the opposite is true for physics. My first taste of physics came during my last year of middle school, when I started studying sciences outside of math. I didn’t delve too deeply into the subject or spend any significant amount of time on it, choosing instead to focus on studying chemistry along with math. It was only as I progressed through my years of high school that I began to devote more of my attention to physics. As a sophomore, I started studying physics to make up for our National Science Bowl team’s lack of a physics person. That was the same year I signed up for the F=ma for the first time. I had only been seriously studying physics for a few months, so I didn’t expect much. Despite this, I still failed to meet my expectations; a registration mistake prevented me from taking the test at all.

My experience (or rather, the lack thereof) with physics competitions as a sophomore was rather discouraging, but that didn’t stop me from signing up for the F=ma again as a junior. It helped that I was taking AP Physics C, taught by Mr. James, that year, which helped fill in the gaps in my knowledge, and was gradually losing interest in chemistry at the same time. I continued to devote most of my energies to math competitions, but physics was overtaking chemistry as my next favorite subject. That year, I qualified for USAPhO and earned a silver medal, far surpassing my expectations. I found that the computational abilities and problem solving skills I had gained from years of math competitions greatly helped me when doing physics. Indeed, physics is the subject most similar to math, so it is no surprise that these were the two subjects I ended up pursuing. Of course, there is no way I would be able to achieve what I have on my own; the support of my parents and teachers was instrumental to my success. I will admit that I was rather surprised to be invited to the U.S. Physics Team this year, but I am grateful that the AAPT has provided me this opportunity. I hope that with this experience, I will be able to end my high school years on a high note.