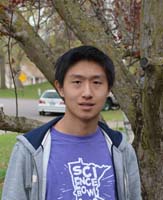 I first heard about the F=ma contest in 9th grade, and at the time, I went into the contest interested in just trying it out. While I’d done some physics before, I wasn’t seriously into it; it was just another science that I learned at school. To my surprise, I ended up close to qualifying for the USAPhO-but I was off by one point. This was encouraging; with another of year of prep, I’d be able to make it to the next round. With this thought in mind, I began preparing for the next year’s F=ma, adding it to the AMCs as a contest I worked on year-round.

While preparing for the F=ma for my sophomore year, I began learning about new ways to approach the problems, like moving to the center-of-mass frame, which reminded me of the problem-solving of the AMCs that had drawn me into math contests. At the same time, I found myself browsing through HyperPhysics, watching PBS SpaceTime videos, and even trying to self-study electromagnetism in my spare time. The same revelation that had happened with math a few years prior was now happening with physics: it was something much deeper, much more fascinating, than I had initially thought it to be. Even despite a disappointing logistical accident that left me unable to do the F=ma my sophomore year, I found that I had the interest and motivation to keep learning. And after making USA Physics Olympiad junior year and getting silver, this motivation kept on growing.

This past year, I’ve done and learned a lot of physics. In addition to doing a lot of practice problems for USAPhO, I learned about the theory (including the mathematics) that underpinned special relativity and quantum mechanics, those two subjects infamous for their seemingly weird descriptions of the universe. And although they stopped being quite as weird, they were still cool. In a way, they became more cool, given that these theories could describe and predict in a rather cohesive model these seemingly strange phenomena. Even the weird idea that the order of events could be swapped in special relativity made sense to me after thinking about it in terms of the invariant spacetime distance.

It’s amazing to think that I’ve made it to the US Physics team, and I’m eager to learn even more physics. There are so many people who’ve helped me along the way, both directly and indirectly. In particular, I’d like to thank my parents, for pushing me to not only prepare for contests but to learn about the inherently fascinating branch of science that is physics, and Mrs. Hoehne, who was my first physics teacher and who got me started on physics contests back in 9th grade.