Cloudy with a Chance of Alpha Particles by Alia Yiskis 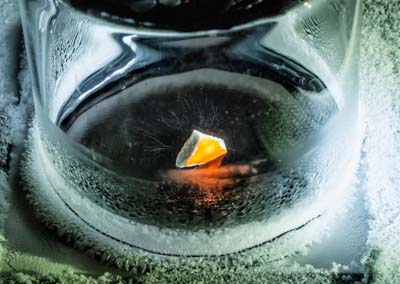 A cloud chamber is a type of particle detector that allows for the viewing of ionized radiation. It consists of a block of dry ice which is used to cool the vapor inside the chamber. Then a steel plate, that is painted black, is placed on top. A chip of radioactive material is placed on the plate and then covered with a sealed glass container. The glass container must be sealed with modeling clay to prevent the vapor from leaking out. The glass container is lined (at the top) with felt that is soaked in rubbing alcohol. When the alcohol evaporates, it creates a supersaturated vapor within the chamber. When the charged radioactive alpha and beta particles shoot off the radioactive material and interact with the vapor, small white particle trials can be seen. Alpha particles are helium nuclei consisting of two protons, that are emitted from radioactive substances. Beta particles are fast moving electrons. The radioactive material itself is a chip off a plate made in the 1950s. The manufacturer used uranium in the glaze for an extra bright red color. This resulted in the plates being highly radioactive. When the plate was measured for radioactivity, with a Geiger counter, it read 1800 clicks per minute. Radioactive material is dangerous and should be handled with caution. This is a time lapse photo showing the trajectory of the decaying radioactive particle