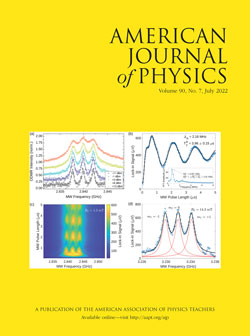 The negatively charged nitrogen-vacancy (NV−) center in diamond is a model quantum system for university teaching labs due to its room-temperature compatibility and cost-effective operation. Based on the low-cost experimental setup that we have developed and described for the coherent control of the electronic spin [Sewani et al., Am. J. Phys. 88, 1156–1169 (2020)], we introduce and explain here a number of more advanced experiments that probe the electron–nuclear interaction between the NV− electronic and the 14N and 13C nuclear spins. Optically detected magnetic resonance, Rabi oscillations, Ramsey fringe experiments, and Hahn echo sequences are implemented to demonstrate how the nuclear spins interact with the electron spins. Most experiments only require 15 min of measurement time and, therefore, can be completed within one teaching lab.

Inharmonicity in plucked |guitar strings by Chris J. Murray and Scott B. Whitfield. DOI: 10.1119/5.0064373
It is a standard undergraduate problem to derive the fundamental frequency of a string, and that of all its harmonics, from the classical wave equation. However, this is not at all representative of what happens in a real-life instrument. The authors here take the physics analysis a step further and consider the rigidity of the string to calculate the characteristic frequencies of plucked guitar strings. Resonance frequencies are no longer proportional to the fundamental frequency, thus reflecting the inherent inharmonicity of the instrument. The model is then compared with experimental data taken for nylon and steel strings of various sizes. This paper could serve as the basis for an undergraduate mechanics or acoustics laboratory.

Acoustic analog to multiple |avoided-crossings in two coupled acoustic cavities by Arjit Kant Gupta and Anjan K. Gupta. DOI: 10.1119/5.0067830
Avoided-crossings occur when two quantum mechanical systems having identical energy levels are made to interact. The energy levels then split, some moving to higher energy, the others to lower energy. This paper presents a classical mechanical analog of such quantum systems: When two acoustic cavities are coupled to one another, modes of identical frequency are split. This work shows how a relatively simple acoustic system can help students understand quantum mechanical phenomena such as band formation. This material is appropriate for an undergraduate class on wave physics, building a connection with condensed matter physics.

Earthquake size: An example |of a statistical distribution that lacks a well-defined mean by Takuya Okabe and Jin Yoshimura. DOI: 10.1119/10.0010261
Some physical systems, such as solar flares, the number of citations of scientific papers, random walks, the lifetime of atoms in a given momentum state, or the allotting of income, follow a power law distribution. This means that the relevant quantity 𝑋 has a probability distribution 𝑝(𝑋)∝𝑋−𝛼, w&th 𝛼>0. In that case, the mean value of 𝑋 diverges, so that the true mean value for 𝑋 cannot be defined, and the calculated mean depends strongly on the sample size. In this paper, the not-so-intuitive properties of power law distributions are illustrated using the distribution of earthquake energy as a practical example, which could be used in undergraduate lectures in statistical physics or mathematical methods for physics.

Oblique angle collisions of |two pendulum balls by Rod Cross. DOI: 10.1119/5.0082240
In introductory mechanics courses, we frequently use collisions between balls to illustrate concepts in energy and momentum conservation. However, collisions between real balls are more complicated, involving friction forces between the balls that can create gripping or sliding interactions and result in spinning balls, and also involving the conversion of mechanical energy into other forms of energy. Through a clever experimental geometry that could easily be replicated in the teaching laboratory, the author measures oblique collisions between different types of balls and analyzes the resulting motion.

Motion of a charged particle |in the static fields of an infinite straight wire by Joel Franklin, David J. Griffiths and Nelia Mann. DOI: 10.1119/5.0077042
A long wire is a classic geometry for problems involving both current and charge. Here, the two are combined, and the resulting motion of a free particle in the combined fields is found analytically, both in non-relativistic and relativistic limits. The motion shows surprising periodicities along different coordinates, depending on the initial conditions. These situations could make interesting additions to courses in mechanics, electromagnetism, or computational physics.

A novel method of images for |solving'Laplace's equation and deriving demagnetization factors for spheroidal bodies by Anupam Garg, J. B. Ketterson and Jinho Lim. DOI: 10.1119/5.0071665
I love teaching the method of images: the uniqueness theorem provides an easy solution to problems that initially seem hopelessly complex. But the downside is that, after teaching one geometry in lecture and assigning another for homework, there's nearly nothing else available for students to work out. This paper gives us another geometry: the prolate spheroid. Then, as an added bonus, the authors show how the same mathematics yields the demagnetization factor for a prolate spheroid, a result that is used widely in magnetization measurements but is seldom derived because—until now—the known mathematical approaches were extremely challenging. Teachers of electricity and magnetism at the intermediate and advanced levels will surely enjoy this paper.

Resources-oriented |instruction: What does it mean, and what might it look like? by Amy D. Robertson, Lauren C. Bauman, Yohannes M. Abraham, Brynna Hansen, Hung Tran and Lisa M. Goodhew. DOI: 10.0009796
Instructors may worry how their students will develop physical understanding if, instead of telling them how to describe physical interactions, we allow them to reason for themselves, starting with their own ideas, explanations, and observations. This paper analyzes one episode, showing how students working in a small group, and with the encouragement and guidance of an experienced teaching assistant, are able to move significantly closer to a standard physics explanation of the behavior of waves on a spring.

Is the equivalence principle |useful for understanding general relativity? by Peter C. Aichelburg. DOI: 10.1119/10.0010106
This work examines Einstein's equivalence principle within a static spacetime metric framework. Familiarity with Minkowski geometry is assumed, but most of the insights that are offered do not require knowledge of the general theory. Readers can gain a deeper understanding of the alteration of time and frequency in the context of rigid acceleration, as well as an appreciation of the validity of the resulting local light bending even in a spatially curved geometry.