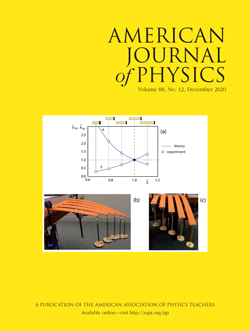 The teaching of structural stiffness is one of the keystones of the undergraduate curriculum in mechanics and the strength of materials. Standard linear theory, going back to Hooke's law, has proven to be very successful in predicting the performance of elastic structures under load. Many courses in basic mechanics have a conventional laboratory component often involving a universal testing machine and extensometer. However, the advent of 3D printing presents an appealing pedagogical opportunity mid-way between theory and a formal lab experience. The material contained in this paper focuses on using the 3D printing of relatively simple, flexible cantilever structures. The relatively high resolution of modern 3D printers facilitates the production of slender (elastically deformable) structures, and thus provides an opportunity to exploit geometric parametric variations to enhance a practical understanding of fundamental mechanics concepts such as stiffness. This approach has proved successful in initial inclusion in both the classroom via demonstration models, as well as in the lab in which elementary facilities can be utilized to acquire data. The boundary conditions associated with a cantilever, and the application of a point force are especially simple to produce in practice, and provide an effective tactile demonstration of the influence of geometrical changes on the relation between force and deflection, i.e., stiffness.

The Poynting effect by Giuseppe Zurlo, James Blackwell, Niall Colgan and Michel Destrade. DOI: 10.1119/10.0001997.
If a solid rubber cylinder is twisted, will it grow longer or shorter? This question was answered experimentally by John Poynting in 1909, but the analytical explanation is non-trivial. This manuscript provides a simple explanation using energy considerations, appropriate for an intermediate-level mechanics course.

A simple demonstration of shear-flow instability by Tom Howard and Ana Barbosa Aguiar. DOI: 10.1119/10.0002438.
Fluid instabilities are usually difficult to illustrate in labs and demonstrations. A simple classroom demonstration of a “barotropic instability,” supported by numerical analysis, is of particular interest to undergraduates in geophysics.

Comparative structural stiffness: Exploiting 3D-printing by Lawrence N. Virgin. DOI: 10.1119/10.0001756.
3D printing is used to make a variety of cantilevers that allow undergraduates to probe the effect of cantilever geometry on stiffness and vibration frequency. This article is particularly useful for students of statics and strength of materials.

Tidal locking and the gravitational fold catastrophe by Andrea Ferroglia and Miguel C. N. Fiolhais. DOI: /10.1119/10.0001772.
The gravitational phenomenon of tidal locking is explored using the effective potential for two orbiting, spinning objects. The limiting case in which one of the objects is point-like is studied in detail, with Mars's moon Phobos given as an example. Appropriate for undergraduate or graduate classical mechanics courses.

Fourier analysis of the non-linear pendulum by Peter F. Hinrichsen. DOI: 10.1119/10.0001772.
For a pendulum undergoing large amplitude oscillations both with and without damping, the motion is represented using a many-term Fourier approximation and is compared with experimental results.

A magnetic velocity Verlet method by A. Chambliss and J. Franklin. DOI: 10.1119/10.0001876.
This manuscript introduces an improved method of computing the trajectories of charged particles in magnetic fields, including magnetic confinement geometries. The method could be easily incorporated into an undergraduate E&M or computational physics course.

A hands-on quantum cryptography workshop for pre-university students by Adrian Nugraha Utama, Jianwei Lee and Mathias Alexander Seidler. DOI: 10.1119/10.0001895.
A quantum cryptography workshop teaches high-school students about the conventional BB84 quantum key distribution protocol. In this hands-on session, a simplification is made to the original protocol, creating a security loophole that student hackers can exploit. Appropriate for motivated high-school or undergraduate students.

On the virial theorem for a particle in a box: Accounting for Cauchy's boundary condition by R. Cabrera-Trujillo and O. Vendrell. DOI: 10.1119/10.0001802.
The virial theorem is demonstrated for a particle in a box, using Cauchy's boundary conditions to account for the average force exerted by the walls on the particle. Appropriate for an undergraduate quantum mechanics class.

Noninteracting electrons in a prototypical one-dimensional sinusoidal potential by David C. Johnston. DOI: 10.1119/10.0001863.
The band structure of non-interacting electrons in a one-dimensional metallic structure with a periodic sinusoidal potential is studied, using numerically-exact solutions to the Mathieu-Schrodinger equation. Appropriate for an advanced class in solid state theory.

Spatial filtering of structured light by Jonathan Pinnell, Asher Klug and Andrew Forbes. DOI: 10.1119/10.0001881.
Spatial filtering is a commonly-used technique to improve the quality of laser light by optically filtering the noise. Here a theoretical and experimental framework is developed to spatially filter “structured” light--i.e., light having an arbitrary beam profile. Appropriate for both undergraduate and graduate optics classes.

Full-field optical coherence tomography—An educational setup for an undergraduate lab by Kai Pieper, Gaël Latour, Jens Küchenmeister, Antje Bergmann, Roman Dengler and Carsten Rockstuhl. DOI: 10.1119/10.0001755.
Optical coherence tomography (OCT) is a measurement technique for non-invasive imaging of interfaces in bulk samples. A simple OCT setup, built from a Michelson interferometer and a microscope, is described, which can be used for undergraduate lab projects.

Complete and commented translation of Guillaume's 1896 paper on the temperature of space by A. K. T. Assis and M. C. D. Neves. DOI: 10.1119/10.0001775.
The paper translated is of interest as a reminder of the state of astronomy and physics at the end of the 19th century. It also provides an example, very appropriate for undergraduates, of the application of physics to astronomical questions.

Gyroscopes simply explained with Coriolis pseudotorques by Richard H. Price. DOI: 10.1119/10.0002141.
A new way to explain why a gyroscope doesn't fall: In a frame that rotates with the gyroscope, the gravitational torque is exactly balanced by the torque from the Coriolis pseudoforce. Appropriate for introductory mechanics students who understand acceleration in rotating frames.

An undergraduate-oriented comment about inverting spectral data to determine the interatomic potential by Jacob Katriel. DOI: 10.1119/10.0001753.
An elementary example is given that shows the insufficiency of the energy spectrum to determine the interatomic potential, even when the bound states form a complete set. Appropriate for advanced undergraduates.

Slow-dissipation limit of the harmonic oscillator with general power-law damping by Jarrett L. Lancaster. DOI: 10.1119/10.0001794.
A resistance to motion in a harmonic oscillator is typically presented as either linear or quadratic in the velocity. Here a generalization is given for any power of the velocity. The presentation is best suited for advanced undergraduates.

3D printing an external-cavity diode laser housing by E. Brekke, T. Bennett, H. Rook and E. L. Hazlett. DOI: 10.1119/10.0002135.
3D printing enables the construction of an external-cavity laser diode at an order-of-magnitude cost reduction compared to a commercial system. This design enables new spectroscopy experiments in the undergraduate curriculum and will also be helpful in some research labs.