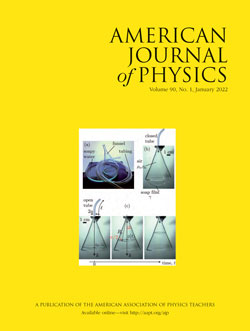 Measuring the viscosity of air with soapy water, a smartphone, a funnel, and a hose: An experiment for undergraduate physics students

We investigate the spontaneous motion of a soap film in a conical geometry connected to a long tube and show how it can be used to measure the dynamic viscosity of air. In contrast to other techniques that are complicated to implement and require expensive and sophisticated equipment, this measurement method relies only on soapy water and three everyday life objects: a smartphone, a funnel, and a hose. More precisely, to determine the viscosity of air, we use a smartphone to record the spontaneous motion of a soap film placed in a funnel when the motion of the film is quasistatic and the flow of air escaping the geometry is viscously dominated. This simple experiment should be of value to undergraduate physics students in learning about effects of both fluid viscosity and surface tension (another fluid property which they could also measure with a smartphone; Goy et al., Phys. Teach. 55, 498–499 (2017)), and the usefulness of reasonable approximations in physics. ACKN

The edge profile of liquid spills by F. Behroozi. DOI: 10.1119/5.0058674
Who has not admired the shape of a liquid drop, be it an elegant dewdrop on a summer morning or a puddle of spilt coffee? What physics dictates the shapes of these phenomena? Surprisingly, the edge profile of drops is not a common topic in fluid dynamics texts. This paper derives the relevant profile-shape differential equations as a function of the density and surface tension of the fluid and examines profile shapes for drops of water resting on various horizontal substrates. Appropriate for an advanced mechanics or fluid dynamics class.

Using the Carnot cycle to determine changes of the phase transition temperature by Oskar Grocholski, Kornel Howil, Stanisław Rakowski and Piotr Maksymiuk. DOI: 10.1119/10.0006455
The Clausius-Clapeyron equation is usually derived using the Gibbs free energy, so it is not discussed in introductory classes. This short article derives the equation by appealing to Kelvin’s statement of the second law of thermodynamics: No heat engine can be 100% efficient, or more efficient than a Carnot engine. This approach couples nicely to concepts typically included in the introductory physics sequence, making the Clausius-Clapeyron equation accessible to beginning students. The authors use the water liquid/ice transition and the normal/superconducting transition to illustrate the strategy.

Hanbury Brown and Twiss effect demonstrated for sound waves from a waterfall: An experimental, numerical, and analytical study by Arnt Inge Vistnes and Joakim Bergli. DOI: 10.1119/10.0006613
In 1956, Hanbury Brown and Twiss (HBT) successfully determined the angular extent of the star Sirius by measuring the cross-correlation in its intensity fluctuations detected at two nearby telescopes. In this article, the authors use the same approach with sound waves emitted by a waterfall to measure its angular extent. The HBT effect is often treated as a quantum phenomenon, but the authors use a conceptually simpler classical wave approach. The effect is derived mathematically, and also explored using numerical simulation, all of which renders the topic suitable for the undergraduate curriculum. If you are curious about the HBT effect, or wish to add it to your curriculum, this article would be an excellent source of information.

Yet another approach to solutions of one-dimensional wave equations with inhomogeneous boundary conditions by Qiong-Gui Lin. DOI: 10.1119/5.0058957
Solving the wave equation or the diffusion equation (in one or more dimensions) with appropriate boundary and initial conditions is one of the basic problems in mathematical physics. This paper revisits the one-dimensional wave equation in a finite space domain, which describes the transversal vibration of a stretched string or the longitudinal vibration of a flexible rod. In this case, there exists yet another approach for dealing with inhomogeneous boundary conditions with a clear physical picture that appears to have previously gone unnoticed.

The Vaidya metric: Expected and unexpected traits of evaporating black holes by Julius Piesnack and Klaus Kassner. DOI: 10.1119/10.0006367
In this article, a model of an evaporating black hole is constructed. The model can be used to answer fascinating questions, such as: “what type of motion would you undergo if you fell into a black hole that is about to disappear from Hawking radiation?” As is often the case with black hole physics, the answers can be delightfully surprising.

Gravitational lens effect revisited through membrane waves by Stefan Catheline, Victor Delattre, Gabrielle Laloy-Borgna, Fréderic Faure and Mathias Fink. DOI: 10.1119/10.0006612
A ball rolling over a warped elastic membrane is a familiar classroom demonstration of motion in a curved spacetime metric. In this article, the authors show that a plane wave propagating on a similar landscape bends in an analogous way to the gravitational lensing of light. They demonstrate this experimentally and also through a numerical simulation based on the wave equation in a Schwarzschild metric. Both experiment and simulation capture the salient features of Eddington’s famous 1919 experiment that provided an important test of general relativity.

Gamma camera imaging in an undergraduate physics course by Mary Lowe, Alex Spiro and Peter Kutt. DOI: 10.1119/10.0006168
Radioactive substances are used in diagnostic medical imaging for purposes such as diagnosing disease or detecting a tumor. In gamma camera imaging, the patient is injected with a gamma-ray emitting pharmaceutical that preferentially collects in a specific location. The camera used to image the tracer consists of a collimator, a scintillator, and a 2-D array of photomultiplier tubes in conjunction with sophisticated software for optimizing the camera’s resolution. The authors first explain the function of each camera component and then describe visible-light replicas for teaching gamma camera imaging to undergraduates. The presentation is suitable for STEM students at all levels, and the teaching apparatus is inexpensive and easy to duplicate.

Vertical quasistatic Poiseuille flow: Theory and experiment by Don S. Lemons, Trevor C. Lipsombe and Rickey J. Faehl. DOI: 10.1119/10.0006245
An easy and inexpensive fluid-mechanics experiment: a viscous fluid (glycerin) drains from a container through a metal straw. Measuring the rate at which the fluid drains shows good agreement with Poiseuille flow. This experiment could easily be performed by introductory students, and even a full understanding of the derivation requires only very simple differential equations.

Measuring the viscosity of air with soapy water, a smartphone, a funnel, and a hose: An experiment for undergraduate physics students by Alexandre Delvert, Pascal Panizza and Laurent Courbin. DOI: 10.1119/10.0006881
Because the viscosity of air is so small, it is quite difficult to measure. The viscosity affects the rate at which air flows through a tube (Poiseuille flow), but both the applied pressure and the flow rate must be accurately measured. This clever experiment measures both parameters simultaneously by observing the motion of a soap bubble at the mouth of a funnel. Suitable for an introductory course on fluid mechanics, the experiment can easily be performed with minimal equipment. Determination of the densit

Determination of density profile by using the refractive index in a linearly salt-stratified fluid: An experiment for an advanced undergraduate laboratory by R. C. Cruz-Gómez, F. A. Velázquez-Muñoz and J. Salcedo-Castro. DOI: 10.1119/10.0006353
A low-cost laser refractography instructional laboratory experiment designed to study stratification in fluids is described. Video analysis of acquired data yields quantitative measurements of the refractive index and density profiles in a linearly stratified salt water column. Quantifying density gradients in stratified fluids is a topic of interest in fields such as oceanography, geophysics, and industrial processing.

Science Between Myth and History: The Quest for Common Ground and Its Importance for Scientific Practice by Taner Edis. DOI: 10.1119/5.0074271