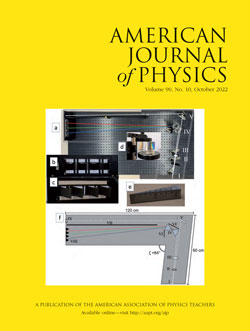 In his 1860 paper On the theory of compound colours, James Clerk Maxwell described an instrument used to obtain a direct comparison between daylight and a mixture of three selected spectral colors. This investigation was part of Maxwell's study of human color vision, color perception, and color representation, and it encompasses his main achievements in the field. The working principle underlying this device provided the basis from which color diagrams have been derived, beginning with the standard chromaticity diagram proposed by the International Commission on Illumination in 1931. We describe a reconstruction of Maxwell's original version of the color box. Constructing and analyzing data obtained with such a replica could serve as a semester project for advanced optics students.

Toast sliding off a table by Sanjoy Mahajan. DOI: 10.1119/5.0121905
The problem of why toast seems to preferentially land with the buttered side down has been considered by philosophers and physicists, and it was even the subject of the 1996 Ig Nobel Prize in Physics. This Back-of-the Envelope paper presents a solution and shows how dimensionless equations can yield insight into the conditions that result in the unfortunate outcome.

Space pirates: A pursuit curve problem involving retarded time by Thales Azevedo and Anderson Pelluso American. DOI: Journal of Physics 90, 730 (2022); https://doi.org/10.1119/5.0069298
Our students normally encounter the concept of retarded time in the treatment of the production of electromagnetic radiation. As the authors discuss, the phenomenon arises also in the context of a chase, where it can be dealt with by employing straightforward integration coupled with interpolation using elementary Mathematica. This approach can function as a simpler introduction to the topic.

Exploring entropy by counting microstates of the p-state paramagnet by Steuard Jensen. DOI: 10.1119/5.0061383
Students already have intuitive experience with most introductory physics concepts like energy, pressure, inertia, or weight.  Entropy is a notoriously difficult concept to teach because, while students can quickly grasp the arrow of time, this intuitive concept lacks an obvious connection to entropy's quantitative definition.  Moore and Schroeder proposed that introductory students learn about temperature, entropy, and the second law by explicitly counting states at fixed energy and calculating thermodynamic quantities.  This paper greatly expands the number of models available for such exercises that upper-level students can use to develop more in-depth understanding.

Astronomy with Chaucer: Using an astrolabe to determine planetary orbits by Michael Robinson. DOI: 10.1119/5.0097302
Antique instruments can have tremendous pedagogical value. One such device is the astrolabe, which goes back to the time of Hipparchus in about 200 BC. By making sightings of the elevation angles of the Sun, stars, and visible planets, this handheld device can help you determine the time, compass directions, the season, your latitude and longitude, and, in conjunction with Kepler's laws, the orbits of planets. This paper provides links to plans for astrolabes that can be prepared with a 3D printer and offers suggestions for class observations and data-analysis assignments. Appropriate for students in astronomy classes at a variety of levels.

Stereographic projection to and from the Bloch sphere: Visualizing solutions of the Bloch equations and the Bloch–Riccati equation by David J. Siminovitch. DOI: 10.1119/5.0088987
Stereographic projection is an elegant analysis technique that receives little attention in undergraduate physics. The author shows that, when it is applied to nuclear magnetic resonance (NMR), it can significantly aid in the visualization of solutions. And I hope readers will take note of the fact that the astrolabe described in the previous paper also uses stereographic projection!

Efimov effect for two particles on a semi-infinite line by Satoshi Ohya. DOI: 10.1119/5.0086802
The Efimov effect is a counter-intuitive effect that appears in many-body quantum systems: when the interaction between two particles is too small to allow pairs to form, many-body bound states appear in which the energies follow a geometric sequence. In other words, a third particle has to come into play for the pair to remain together. It turns out that this is a consequence of the breakdown of continuous scale invariance to discrete scale invariance: A system that was initially invariant with respect to any given change in size suddenly becomes invariant only for fixed values of changes in size when the two-particle interaction weakens. The Efimov effect, far from being a theoretical speculation, has been observed in ultra-cold atomic systems and in liquid helium. This paper proposes a toy model to introduce this phenomenon to students with minimum formalism, and could be used as an interesting exercise for an advanced quantum mechanics course.

Waving arms around to teach quantum mechanics by Kelby T. Hahn and Elizabeth Gire. DOI: 10.1119/5.0073946
Building a representation of quantum states is notoriously difficult for students starting quantum mechanics. This article can help you with this. It explains how students can impersonate quantum spin eigenstates with their arm, gaining a deeper physical understanding of relative phases, decomposition in an eigenstate basis, and the time-evolution of quantum states. This paper is guaranteed to bring more fun to your introductory quantum mechanics class and can also be adapted for teaching complex numbers.

Maxwell's color box: Retracing the path of color matching experiments by Valentina Roberti, Boris Kalinic, Tiziana Cesca, Luca Bacci and Giulio Peruzzi. DOI: 10.1119/5.0087786
We all think of James Clerk Maxwell as a consummate theoretical physicist. True, but lesser-known is that he was also an accomplished experimentalist. In the 1850s and 1860s, Maxwell developed a spectroscopic device that he dubbed a “color box,” which permitted an observer to compare a mixture of three adjustable spectral colors to white light. By establishing three primary colors (red, green, and blue), Maxwell built up expressions for how two primaries plus a chosen third color had to be mixed in intensity to reproduce white. This led to the development of a color triangle diagram, which laid the foundations for chromaticity and color-vision studies. This paper describes Maxwell's instrument and the construction of a replica made with modern equipment. Experiments give results in excellent agreement with those published by Maxwell. Constructing and using such a device could be a semester project for advanced optics students. A video abstract accompanies the online version of this paper.

A z-axis tunneling |microscope for undergraduate labs by Randy Lindgren, Wesley Kozan, Noah Fuerst, Douglas Knapp and Joshua P. Veazey. DOI: 10.1119/5.0094028
A simplified alternative to the scanning tunneling microscope is presented. This affordable experimental setup, which limits tip motion to the vertical axis alone, facilitates quantitative measurements of electron quantum tunneling and the electronic density of states of various materials. Using this apparatus, acquisition and analysis of tunneling current versus tip height data are demonstrated on gold and graphite samples. In addition, tunneling current versus bias voltage data are shown to display the qualitative differences in the electronic density of states for these two materials. The work described here offers an accessible project to study quantum tunneling and basic electronic band structure for the undergraduate instructional laboratory.