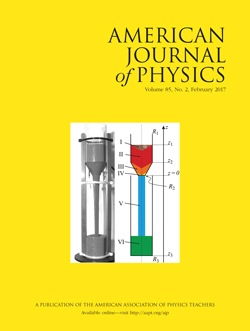 AAPT announces that Richard Price, Massachusetts Institute of Technology, will assume the position of Editor for the  American Journal of Physics in 2017, following the term of David P. Jackson.
Read more.

Weight of an hourglass—Theory and experiment in quantitative comparison by Achim Sack and Thorsten Pöschel. DOI: 10.1119/1.4973527

A flowing hourglass changes its weight in the course of time because of the accelerated motion of its center of mass. While this insight is not new, it is frequently said that the effect is tiny and hardly measurable. Here, we present a simple experiment that allows the monitoring of weight as a function of time, and that shows that there are different stages of the weight variation. The experimental result is in quantitative agreement with theory.

Weight of an hourglass—Theory and experiment in quantitative comparison by Achim Sack and Thorsten Pöschel. DOI: 10.1119/1.4973527

Sliding down an arbitrary curve in the presence of friction by Felipe González-Cataldo, Gonzalo Gutiérrez, and Julio M. Yáñez. DOI: 10.1119/1.4966628

The Hunt for Vulcan…And How Albert Einstein Destroyed a Planet, Discovered Relativity, and Deciphered the Universe. DOI: 10.1119/1.4968558