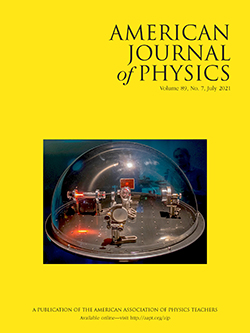 An interactive gravitational-wave detector model for museums and fairs

In 2015, the first observation of gravitational waves marked a breakthrough in astrophysics and in technological research and development. The discovery of a gravitational-wave signal from the collision of two black holes, a billion light-years away, received considerable interest from the media and public. We describe the development of a purpose-built exhibit explaining this new area of research to a general audience. The core element of the exhibit is a working Michelson interferometer: a scaled-down version of the key technology used in gravitational-wave detectors. The Michelson interferometer is integrated into a hands-on exhibit, which allows for user interaction and simulated gravitational-wave observations. An interactive display provides a self-guided explanation of gravitational-wave related topics through video, animation, images, and text. We detail the hardware and software used to create the exhibit, and discuss two installation variants: An independent learning experience in a museum setting (the Thinktank Birmingham Science Museum) and a science-festival with the presence of expert guides (the 2017 Royal Society Summer Science Exhibition). We assess audience reception in these two settings, describe the improvements we have made given this information, and discuss future public-engagement projects resulting from this work. The exhibit is found to be effective in communicating the new and unfamiliar field of gravitational-wave research to general audiences. An accompanying website provides parts lists and information for others to build their own version of this exhibit.

Hysteresis in a simple V-shaped spring-mass system Video Abstract Icon by Christopher Ong. DOI: 10.1119/10.0003536
Students are often introduced to hysteretic behavior by studying ferromagnetism or non-linear elastic materials. But hysteresis can also occur in exceedingly simple systems, such as the mass-spring system analyzed by the author. The simplicity of the analysis may allow instructors to introduce this important topic in introductory mechanics courses, and a physical model of the system could be used as a demonstration or laboratory apparatus. The link above will also take the reader to the article's video abstract.

Rock and roll of an ellipse by G. R. Heppler and G. M. T. D'Eleuterio. DOI: 10.1119/10.0003731
A small disturbance from equilibrium causes an ellipse on an inclined plane to rock back and forth. A larger disturbance causes it to roll smoothly down the plane and eventually jump off of the surface. Students and instructors of advanced classical mechanics courses will be surprised that a system that is so simple can exhibit such rich dynamics.

Oscillation of a balanced hollow cylinder on an inclined plane by R. De Luca. DOI: 10.1119/10.0003797
The author studies the behavior of a thin-walled cylinder lying on its side atop an inclined plane. The cylinder is balanced against rolling by a mass attached to its inner rim. The system's stable and unstable equilibria are found using geometry and trigonometry, while oscillations about equilibria are examined using a Lagrangian approach. The former presents a challenging exercise for introductory physics students, while the latter is suitable for an upper level mechanics class. The system is simple and inexpensive to construct, making it ideal for experimental verification of the results. The link above will also take the reader to the article's video abstract.

The true story of Newtonian gravity by Eugene Hecht. DOI: 10.1119/10.0003535
Under pressure of time we often teach the law of universal gravitation F = GmM/r2 as if it emerged fully formed out of the mind of Isaac Newton, perhaps with brief nods to the contributions of Kepler, Huygens, and Halley. But physically motivated theories of mass and force go back to at least the thirteenth century and involve many players, both pre- and post-Newton. This paper, which is accessible to readers at all levels, traces the development of this famous expression.

Scattering problems via real-time wave packet scattering by M. Staelens and F. Marsiglio. DOI: 10.1119/10.0003689
In quantum mechanics classes, we typically present the time-independent theory of scattering. This approach is mathematically simpler than showing the time dependence of wave packets scattering from a barrier, but it can be conceptually confusing to students. Considering time-dependent scattering of wave packets within a tight-binding model allows the introduction of wave packets that do not spread as they propagate. The paper presents animations of these wave packets scattering from simple defects in a 1-D solid and shows how the dynamics can be calculated using a straightforward numerical diagonalization. The link above will also take the reader to the article’s video abstract.

An interactive gravitational-wave detector model for museums and fair by S. J. Cooper, A. C. Green, H. R. Middleton, C. P. L. Berry, R. Buscicchio, E. Butler, C. J. Collins, C. Gettings, D. Hoyland, A. W. Jones, J. H. Lindon, I. Romero-Shaw, S. P. Stevenson, E. P. Takeva, S. Vinciguerra, A. Vecchio, C. M. Mow-Lowry, and A. Freise. DOI: /10.1119/10.0003534
Instructions are given for the construction of a gravitational-wave model for both permanent use (exhibits) and portable use (demonstrations). You'll also find many practical tips on the use of the device and the set-up of exhibits and demonstrations.

Integrating numerical modeling into an introductory physics laboratory by Diana Sachmpazidi, Manuel Bautista, Zbigniew Chajecki, Claudio Mendoza and Charles Henderson. DOI: 10.1119/10.0003899
This paper shows how computational physics can be introduced into an introductory laboratory using Excel and documents student and instructor reactions to the new curriculum.

Haidinger–Michelson rings in white light by Youssef El Azhari and Saïd Tagmouti. DOI: 10.1119/10.0003798
The bulls-eye pattern typically seen at the output of a Michelson interferometer cannot be observed when the input is white light. However, inserting a glass slide into one of the arms not only allows Haidinger–Michelson rings to be observed, but also enables the measurement of the index of refraction of the glass.

Soil analysis using a 2″ NaI gamma detector by Rebekah Aguilar, Patrick Powers, Nina Abramzon and P. B. Siegel. DOI: 10.1119/10.0003490
This paper shows how students can use a 2-in. NaI detector to measure the main sources of terrestrial gamma radiation in their environment, i.e., the 40K, 238U and 232Th decay series, and learn how to calibrate the detector for efficiency and sample self-absorption. This apparatus allows the experiments to be performed over two three-hour laboratory sessions so that even students in lower-level courses can learn about natural radiation in the environment.