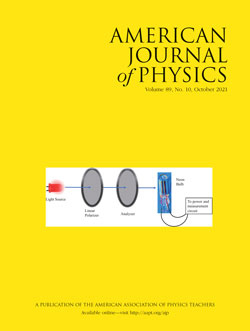 This work outlines a new instructional laboratory experiment focused on the photoelectric effect and the determination of Planck's constant. The described laboratory system employs contemporary experimental techniques, including real-time data acquisition based on the use of Arduino boards. The basis of this experiment is to measure the associated turn-on voltages of a small neon bulb as it is illuminated with several different optical wavelengths. Six different LED and laser illumination sources were used with wavelengths ranging from UV (383 nm) to red (659 nm). A plot of the bulb's turn-on voltage as a function of the inverse of the excitation wavelength showed a linear relationship with a high correlation coefficient. Planck's constant was determined from this plot, yielding a value of ℎ=(7.4±1.1)×10−34 J·s. Additionally, the system allows for experimental verification of the independence between excitation light intensity and the energy needed to ionize the gas inside the bulb.

Tidal effects in a spacecraft by Ugo Besson. DOI: 10.1119/10.0005070
When an astronaut releases an object from rest within an orbiting spacecraft, its ensuing motion can appear quite complicated. In this article, the author derives the equations of motion in the spacecraft's reference frame (called the Clohessy–Wiltshire equations) in a straightforward, physically intuitive way, completely sidestepping the need for advanced mathematics and, thereby, rendering the treatment suitable for an undergraduate mechanics course. Using these equations, the author shows how simple springs, rods, balls confined to tubes, and balloons can provide an astronaut with valuable information about the spacecraft's orbit. In addition, he discusses the relevance of the equations to spacecraft rendezvous, extra-vehicular activities, and the earthbound phenomenon of ocean tides.

Isotropic inertia tensor without symmetry of mass distribution by Andrei A. Snarskii, Sergii Podlasov and Mikhail Shamonin. DOI: 10.1119/10.0005416
A quick poll amongst your students—or even your colleagues—should convince you that getting an intuitive grasp of moments of inertia is not easy. This paper may help with this. First, it offers a simple and elegant way of proving that a cube has the same moment of inertia, whatever axis is considered, provided it passes through its center of mass. It also gives an example of a non-symmetrical body that, counter-intuitively, has an isotropic moment of inertia tensor. This makes a nice brain-teaser for your undergraduate classical mechanics class.

Analyzing the motion of a mass sliding on a sphere with friction by Terry W. McDaniel. DOI: 10.1119/10.0005071
Most readers will think that they are familiar with the problem of a mass sliding on a sphere. However, what if there's friction? What if the mass starts from a point other than the top and has an initial velocity in the azimuthal direction? This problem presents a rich playground of mechanics problems and is particularly well suited for computational assignments.

Drone–drone collisions over New York City via the kinetic theory of gases by Edward W. Walbridge. DOI: 10.1119/10.0005035
If the predictions made by companies, such as Amazon, hold true, more than 50% of parcel deliveries will be made by drone aircraft within the present decade. The skies above major cities will be abuzz (literally) with swarms of delivery drones, and the average separation between them could be as low as 140 m. In this article, the author uses kinetic theory to estimate the surprisingly high collision rate between hypothetical “dumb” drones, which have no collision avoidance capability, and discusses the required reliability of such systems to ensure safe operation.

Understanding and compensating for noise on IBM quantum computers by Scott Johnstun and Jean-François Van Huele. DOI: 10.1119/10.0006204
Useful quantum computing algorithms have been developed over the past few decades with theoretical, idealized devices in mind. Due to the recent rapid progress in quantum technologies, there are now many types of real quantum computing hardware available, some that contain more qubits can be easily simulated on a laptop and so contain potential to perform truly useful computations. However, these real devices come with important limitations due to noise and qubit connectivity. For students of quantum computing, learning about the limitations of real physical devices will be essential for doing useful work in the field. This paper discusses Simon's algorithm and uses IBM's publicly available Qiskit platform to compare the results of running the algorithm on both real and simulated devices.

Using Hilbert curves to organize, sample, and sonify solar data by W. Dean Pesnell, Kyle Ingram-Johnson and Kevin Addison. DOI: 10.1119/10.0005403
Sometimes, we want not only to see our data but also to hear it. Sonifying data can reveal new patterns and information, and they can also make data accessible to people with vision impairments. However, attempts to sonify data, particularly 2D images, lead to many questions and options, which this paper introduces in a way that will be useful both to those who want to increase the accessibility of science and for those looking for interesting student projects that may reveal new trends in data.

Broken pencils and moving rulers: After an unpublished book by Mitchell Feigenbaum by Jean-Pierre Eckmann. DOI: 10.1119/10.0005154
This paper tells you how to introduce your undergraduate students to caustics with a bucket full of water and a ruler. If a ruler is immersed into water, the image your eye sees can seem to come from two different source points, located on two different caustics. The brain selects what it perceives as the sharpest one, depending on the astigmatic correction it makes, which, in turn, is determined by the orientation of your head. As a consequence, when tilting the head, about 80% of people perceive that the ruler is moving in the water. This makes for a fun class demonstration. This paper is also a tribute to Mitchell Feigenbaum, one of the pioneers of chaos theory, who spent his last few years working on caustics and anamorphoses.

Methods to depolarize narrow and broad spectrum light by Tom A. Kuusela. DOI: 10.1119/10.0005269
We are all familiar with ways to produce a polarized light beam from an unpolarized source. However, some optics applications require the opposite: How do you produce an unpolarized beam from a polarized source? In this article, the author shows how to exploit the finite bandwidth of the source to depolarize it completely. The apparatus used to achieve this and to measure the polarization state of the beam is simple, inexpensive, and easy to understand, making it well-suited for use in undergraduate (or graduate) optics laboratories.

Photoelectric effect measurements on a conventional neon bulb by Jesús González-Laprea, L. J. Borrero-González, Kabir Sulca, Santiago Díaz-Echeverría and Carlos Alberto Durante Rincón. DOI: 10.1119/10.0005016
Measuring the turn-on voltage of a conventional neon bulb enables the observation of the photoelectric effect in a low-cost experiment. Instructions are given for performing the experiment using a combination of LEDs and lasers as photon sources.

Molecular dynamics simulation of synchronization of a driven particle by Tiare Guerrero and Danielle McDermott. DOI: 10.1119/10.0005037
The authors use simple molecular dynamics simulation to show how the motion of a single particle can become synchronized to environmental and external forces, providing insight into the behavior of a number of condensed matter systems.

Gravity-driven fluid oscillations in a drinking straw: An alternative approach by Robert Frederik Diaz Uy. DOI: 10.1119/10.0005993
The original formulation of Lagrangian mechanics accounts only for conservative forces. Many students are not aware that Lagrange methods can still be used in the presence of non-conservative effects, such as friction and variable masses. This paper uses a momentum flux term in the Euler–Lagrange equation to describe the oscillations of a variable mass of liquid in a drinking straw subject to a damping force as it flows into and out of a bath, eventually settling at the bath level. This paper is a follow-up to a previous paper published here, describing a laboratory experiment and Newtonian analysis of the same problem.