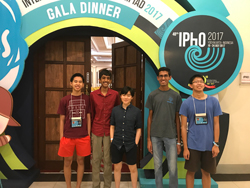 The U.S. Team was led by Paul Stanley of Beloit College and David Fallest of North Carolina State University.

"AAPT is proud to lead the selection process that identifies such exceptional student scholars. Their outstanding performance in this international competition is a reflection of the work of their coaches, the entire 2016 Physics Team, the support of their families, and the best of physics education," said Dr. Beth A. Cunningham, Executive Officer of the American Association of Physics Teachers.

AAPT is an international organization for physics educators, physicists, and industrial scientists—with members worldwide. Dedicated to enhancing the understanding and appreciation of physics through teaching, AAPT provides awards, publications, and programs that encourage teaching practical application of physics principles, support continuing professional development, and reward excellence in physics education. Founded in 1930, the Association is headquartered in the American Center for Physics in College Park, Maryland.