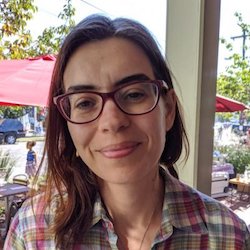 2023 Homer L. Dodge Citation for Distinguished Service to AAPT to be Awarded to Glenda Denicolo

College Park, MD, August 22, 2022—AAPT has announced that Glenda Denicolo will receive the association's Homer L. Dodge Citation for Distinguished Service to AAPT, during their 2023 Winter Meeting. Denicolo, Associate Professor at Suffolk County Community College is honored for exemplary service contributions to the mission of the American Association of Physics Teachers through exceptional leadership and motivation to the TYC community, AAPT's Committee on Physics in Two-Year Colleges, and to individual members.

Regarding her selection to receive this citation, Denicolo said, “AAPT has provided me with an invaluable sense of community, and I feel deeply honored to receive this award.”

A member of AAPT since 2008, Denicolo became a member of the Committee on Physics in Two-Year Colleges in 2015 and served as Vice Chair in 2018 and as Chair in 2020. She has provided exceptional leadership and motivation to the TYC community, AAPT's Committee on Physics in Two-Year Colleges, and to individual members personally.  Her efforts resulted in significantly reducing the isolation felt by Two-Year College Physics faculty across the nation at the beginning and through the pandemic. In her work on the Committee, she has been a consistent leader and motivator. During the early days of the COVID-19 pandemic, teachers across the country found themselves strangely isolated from their home institutions, many for the first time. Denicolo initiated a series of virtual committee meetings via Zoom that not only served to reunite them literally from coast to coast but to allow them to commiserate and share ideas for how to make it through what would be almost two years of unprecedented activity. She even established a YouTube channel so TYC faculty could make use of the sharing from these meetings.  In addition, Denicolo acted as the driving force behind the movement to build on previous successful professional development efforts for Two-Year College faculty in a more permanent and sustainable way. Her efforts in motivating colleagues and tirelessly working on an NSF white paper have led to the successful funding of The Organization for Physics at Two Year Colleges (OPTYCs) NSF grant that will positively affect the future of the AAPT TYC Physics community for years to come.