Douglas Brown will be Recognized as a 2020 Recipient of the Homer L. Dodge Citation for Distinguished Service to AAPT 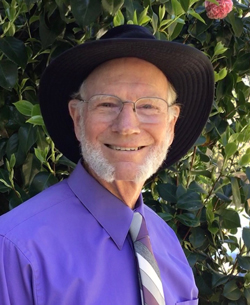 AAPT has announced that Douglas Brown will receive the association's Homer L. Dodge Citation for Distinguished Service to AAPT, during their 2020 Summer Meeting.

Brown is Physics Professor Emeritus, Cabrillo College, Aptos, California. In retirement, he continues to actively support Tracker, the free video analysis and modeling tool he developed as part of the Open Source Physics project. A member of AAPT since 1991, he has been recognized for teaching excellence and served as department chair at Cabrillo. He is currently a resource editor for the Tracker collection in the ComPADRE digital library. Tracker is widely used in the physics community with over 1 million downloads. It has been translated into 26 languages and it is regularly cited in The Physics Teacher, with 81 citations for the original 2009 Tracker paper (Vol 47, p 145).

Brown’s interest in video analysis started in the early 1990s and led him to begin developing Tracker during a sabbatical leave in 2001. In 2002 he joined the Open Source Physics project, ensuring that Tracker would be freely available and widely disseminated. Since then, Tracker has become a powerful video analysis tool with automatic tracking and the ability to analyze videos that tilt, pan, zoom or have skewed views of the action. Brown also added spectroscopic analysis to Tracker, going beyond the capabilities of traditional video analysis programs. Tracker includes a data tool so students can easily fit theoretical curves to their data.

In 2007 Brown extended Tracker beyond video analysis by provided a modeling tool as well. Students build dynamic particle models that move according to Newton’s laws, then overlay the models on videos to directly compare them to the real world. This allows teachers to include basic computational physics at the introductory level with very little instructional overhead.

Tracker is used in popular physics forums as well for outreach to the general public. For example, Wired magazine’s Dot-Physics blog (https://www.wired.com/tag/dot-physics/) often uses Tracker to explore the physics in action movies and YouTube videos while the UK’s National Space Academy uses Tracker to analyze experiments recorded on the International Space Station (http://astroacademy.org.uk/resources/). The ComPADRE digital library also has many ready-to-use Tracker experiments contributed by physics teachers from around the world.

Brown has given Tracker-based talks and workshops at regional, national, and international meetings and has published articles on video analysis and modeling in TPT and other journals.

Regarding his selection to receive this citation, Brown said, “This is an incredible honor that is entirely thanks to the many AAPT colleagues and mentors who have both led the way and supported the development of video analysis in physics education. I’m particularly grateful to the Open Source Physics team led by Wolfgang Christian.”