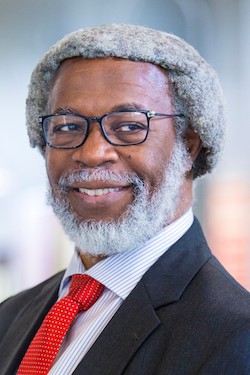 College Park, MD, August 8, 2022—Dr. Sylvester James Gates, Jr. has been named as the 2023 recipient of the prestigious Hans Christian Oersted Medal, presented by the American Association of Physics Teachers (AAPT). The Medal will be awarded at a Ceremonial Session of the 2023 AAPT Winter Meeting. The Oersted Medal recognizes his outstanding, widespread, and lasting impact on the teaching of physics through his national leadership in physics education, his exceptional service to AAPT, and his mentoring of students and in-service teachers. The year of 2022 marks the fifty-first consecutive year of his service as a university instructor in mathematics and physics.

Gates is the Clark Leadership Chair in Science in the Department of Physics and School of Public Policy at the University of Maryland at College Park (UMCP). Prior to July of 2022 he spent the previous six years at Brown University where he held appointments as the Brown Theoretical Physics Center Director, Ford Foundation Professor of Physics, an Affiliate Mathematics Professor, and a Faculty Fellow of the Watson Institute for International Studies & Public Affairs. In addition he was the 2021 President of the American Physical Society (APS).

Gates has had a very long and successful career as a theoretical physicist and an educator. He is well known for his work on supersymmetry, supergravity, and superstring theory. From 1985 - 2016 he was a faculty member at University of Maryland, College Park as a University System Regents Professor, the John S. Toll Professor of Physics, the Director of the String and Particle Theory Center, and Affiliate Professor of Mathematics. He also served on the U.S. President’s Council of Advisors on Science and Technology (PCAST) under President Barack Obama. In he served on the Maryland State Board of Education from 2009-2016, and the National Commission on Forensic Science from 2013-2016. Though he resigned in 2017 from the University of Maryland, he has recently returned in 2022.

Sensitive to diversity issues over the duration of his career, in 1995 he authored an essay entitled "Equity versus Excellence: A False Dichotomy in Science and Society." This avenue of his writings eventually led to a work "Thoughts On Creativity, Diversity and Innovation in Science and Education" that was cited by the U.S. Supreme Court of the United States in its 2016 decision in the case 'Abigail N. Fisher v. University of Texas at Austin, et. al.' Gates has engaged efforts to look at social justice themes within physics, physics education and policy. He held the position of the president of the National Society of Black Physicists. He also is an elected member of the American Academy of Arts and Sciences, and the American Philosophical Society. In 2013, he was elected to the National Academy of Sciences, becoming the first African-American theoretical physicist so recognized in its 150-year history. Also in 2013 he was awarded the National Medal of Science. His significant contributions to the field of physics, his commitment to increasing the participation of underrepresented groups in STEM, and his dedication to improving physics education.

He has received a number of very prestigious awards including the Edward A. Bouchet award from APS (1994) and National Medal of Science (2013) and the Scientist of the Year Award (2014) from the Harvard Foundation.

In addition to the prestigious positions that Gates has held and awards that he received, he also has been instrumental in shaping physics education particularly at the undergraduate level through his service on various physics education focused advisory boards and task forces. Gates has provided undergraduate research experiences via the Summer Student Theoretical Physics Research Session (SSTPRS) since around 2000. Students attending the SSTPRS are immersed in the mathematics that is used in supersymmetry and superstring theory. Over 150 undergraduate students have participated in this program. As Gates notes, most of these students do not become theoretical physicists and end up in a range of careers. Instead, the purpose of the program is to help these students “think like a physicist.” The SSTPR program continued even during the pandemic with students interacting via Zoom! He has inspired an entirely new generation of students learning physics.

Gates served as an active member of the Physics and Astronomy New Faculty Workshop (NFW) Advisory Board. The NFW has had a large impact on the teaching of physics in four-year colleges and universities. The NFW advisory board has helped the organizers improve the workshops and create a more impactful experience for participants. His feedback on the effectiveness of the program was on point providing critical and yet supportive advice on the direction that the workshops should go. It was evident from his feedback that he was concerned about the future of the participating new faculty members and their impact on students through their teaching. This feedback helped shape future workshops including proposals to NSF to continue funding the NFW.

The Joint Task Force on Undergraduate Physics Programs (J-TUPP) was a joint task force convened by AAPT and APS and charged with preparing a report to engage and inform physicists in answering the question: What skills and knowledge should the next generation of undergraduate physics degree holders possess to be well prepared for a diverse set of careers? The project emerged from work conducted by the AAPT Undergraduate Curriculum Task Force and the concern that most physics departments focused on career paths leading students to academic faculty positions. Gates was part of a task force working on this project. The task force met regularly over several years asking difficult questions about the needs of employers and the development of skills that are missing from the undergraduate physics curriculum. He provided an important perspective as someone who mentored many undergraduate students as well as served on PCAST during a period in which undergraduate STEM education was a focus. His full engagement in the work of the task force including writing a section of the report and assisting with dissemination were critical to the success of the project. Many physics departments have now taken the report and implemented changes to their curricula.

Several years ago, the AIP Liaison Committee on Underrepresented Minorities was dismayed that the number of African Americans receiving undergraduate degrees in physics had not increased in many years. The committee approached the AIP Board of Directors to approve a study to develop concrete steps to implement positive change for this critical issue of diversity, equity, and inclusion. The AIP Board approved the study and the AIP National Task Force to Elevate African American Representation in Undergraduate Physics & Astronomy (TEAM-UP) was formed with Gates serving as a member of the task force. The TEAM UP task force spent two years investigating the reasons for the persistent underrepresentation of African Americans in physics and astronomy and produced a report with its findings. Finally, in 2021 the American Institute of Physics made him the recipient of its Andrew Gemant Award.

In 2020 during the increasing awareness of the inequities faced by Black, Indigenous, and People of Color (BIPOC) physicists, Gates, in his position as APS Vice President, created a new webinar series to “make physics inclusive and equitable.” The workshop series Delta Phi (“change physics”) has reached a broad audience of physicists including physics educators from K-12 through graduate education. The first webinar occurred in June 2020 and a panel that included past AAPT president Mel Sabella focused their discussion on why everyone, no matter their position, has an important role in building a diverse next generation of physicists. Gates has made increasing diversity and equity in physics a goal during his year as APS president.

His recent books, “Proving Einstein Right: The Daring Expeditions that Changed How We Look at the Universe,” (with Cathie Pelletier) and "Reality in the Shadows or What the Heck's the Higgs" (with Frank Blitzer and Steven Sekula) are excellent examples of how he brings the public into the world of science.

During the Obama administration he served on the U.S. President’s Council of Advisors on Science and Technology (PCAST) and was the co-chair of the PCAST working groups for STEM Education which presented recommendations to the President. The seminal reports that were part of this effort, “Prepare & Inspire,” and “Engage to Excel” were extremely useful to science educators around the world, providing a scientific rationale for the importance of science and math as well as how we need to increase access to these fields for all students.

This work on the front lines of scientific policy advising played a major part in his role as an advocate for science and science education. In 2013, President Obama awarded Jim the 2011 National Medal of Science, the highest recognition given by the U.S. to scientists with the citation, ‘‘For his contribution to the mathematics of supersymmetry in particle, field, and string theories and his extraordinary efforts to engage the public on the beauty and wonder of fundamental physics.”

His work on promoting diversity, equity and inclusion in physics and the sciences is significant. As an example, he has given talks on racism and STEM, the history of African Americans in Science, and Inclusivity in String Theory. In his role in the Presidential line of the American Physical Society, he has pushed the organization forward on thinking about DEI efforts in Physics. He has taken bold stances on the issue and has helped APS develop concrete actions.

About the Award
The Oersted Medal is named for Hans Christian Oersted (1777-1851), a Danish physicist who, in the course of creating a demonstration for teaching his class, discovered that electric currents cause a magnetic field. This was a crucial step in establishing the theory of electromagnetism so important in building modern technology and modern physics. The award was established by AAPT in 1936 and is given annually to a person who has had outstanding, widespread, and lasting impact on the teaching of physics. Some previous Oersted award winners are John Winston Belcher, David Sokoloff, Gay Stewart, George F. Smoot, Mildred S. Dresselhaus, Carl Wieman, Lillian McDermott, Hans Bethe, Carl E. Sagan, Edward Purcell, and Richard Feynman. The complete list of recipients can be found at http://www.aapt.org/Programs/awards/oersted.cfm.

About AAPT
AAPT is the premier professional society established to advance the greater good through physics education. With the support of members worldwide, AAPT is an action-oriented organization designed to develop, improve, and promote best practices for physics education as part of the global need for qualified Science, Technology, Engineering, and Mathematics teachers who will inspire tomorrow's leaders and decision makers. AAPT was founded in 1930 and is headquartered in the American Center for Physics in College Park, Maryland.