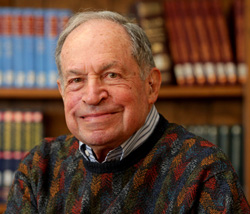 This prestigious award will be presented to Pines at a Ceremonial Session of the 2013 AAPT Winter Meeting in New Orleans, LA. Pines was selected to receive the Jackson Award in recognition of his authorship of “The Many Body-Problem” and “Elementary Excitations in Solids” and the two-volume text/monograph, “The Theory of Quantum Liquids,” written with Philippe Nozieres.

These publications served to define and describe significant sub-fields of physics. Additionally, he is recognized as the founder of the innovative series, Frontiers in Physics, containing over 100 volumes, for which he has served as Editor since its inception in 1961. The series has been a significant source of knowledge and inspiration for graduate students in all fields of physics. To quote from the Editor’s Foreword: "The series has made it possible for leading physicists to communicate in coherent fashion their views of recent developments in the most exciting and active fields of physics—without having to devote the time and energy required to prepare a formal review or monograph.”

In accepting the award, Pines noted, “I am most pleased to receive this quite unexpected honor and recognition, and very much look forward to attending the AAPT Winter, 2013, meeting in New Orleans and giving the Award lecture, not least because David Jackson is a former colleague and friend of long standing.”

Pines is Distinguished Research Professor at UC Davis, Research Professor of Physics and Professor Emeritus of Physics and Electrical and Computer Engineering in the Center for Advanced Study, University of Illinois at Urbana-Champaign, and retired last year as the Founding Director of the Institute for Complex Adaptive Matter, a global partnership connecting scientists who study emergent behavior in matter in its 71 branches representing 111 institutions.

About the Award
Named in honor of outstanding physicist and teacher, John David Jackson, this award recognizes physicists and physics educators who, like John David Jackson, have made outstanding contributions to curriculum development, mentorship, or classroom teaching in graduate physics education. This award recognizes that great teaching CAN be done and should be expected of great scientists at leading institutions, not only from people whose primary or entire focus is on teaching

Previous winners of this award are Kip Thorne and Eugene Commins.  Additional information about the award is available at http://www.aapt.org/Programs/awards/jackson.cfm.

About AAPT
AAPT is an international organization for physics educators, physicists, and industrial scientists—with members worldwide. Dedicated to enhancing the understanding and appreciation of physics through teaching, AAPT provides awards, publications, and programs that encourage practical application of physics principles, support continuing professional development, and reward excellence in physics education. AAPT was founded in 1930 and is headquartered in the American Center for Physics in College Park, Maryland.
For more information: Contact Marilyn Gardner, Director of Communications, mgardner@aapt.org, (301)209-3306, (301)209-0845 (Fax), www.aapt.org