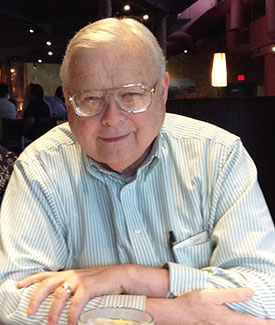 College Park, MD, March 15, 2019—AAPT has announced that Tom Greenslade will receive the Robert A. Millikan Medal during the 2019 Summer Meeting in Provo, Utah. This award recognizes educators who have made notable and intellectually creative contributions to the teaching of physics.

Greenslade is a Professor Emeritus of Physics at Kenyon College. In nominating him for this honor his colleagues noted that he has been making "Notable and intellectually creative contributions to the teaching of physics for more than 50 years. Many of these contributions have been in the form of articles published in The Physics Teacher (TPT). His total number of papers in TPT (the earliest in 1969, the most recent in 2019) far exceeds that for any other author. In addition, he has made many hundreds of oral presentations at physics meetings and in other professional settings on a wide variety of topics related to physics teaching. He is a widely recognized expert on the history of physics, especially early teaching apparatus, and shares his vast knowledge and expertise with the broader physics education community in numerous ways."

Regarding his receipt of the Millikan Medal, Greenslade said, "I am pleased to follow in the footsteps of my graduate school advisor Peter Lindenfeld (1989) and my long-time Kenyon College colleague Franklin Miller, Jr. (1970).

Greenslade has been generous in sharing his vast knowledge and expertise with the broader physics community in a variety of other ways. He maintains a website, “Instruments for Natural Philosophy” that includes some 1850 pictures of early physics apparatus along with descriptions and references, and he answers many queries from historians and collectors. His collection of about 775 pieces of physics teaching apparatus from the 1850-1950 era is housed in a wing of his 1857 house in Gambier. Visitors range from children to professors of physics; make an appointment and visit. His large collection of old, primarily 19th century, textbooks and early equipment catalogs preserve original descriptions of historically important laboratory and demonstration apparatus,

About the Award The Robert A. Millikan Medal recognizes those who have made notable and intellectually creative contributions to the teaching of physics. The recipient delivers an address at an AAPT Summer Meeting and receives a monetary award, the Millikan Medal, an Award Certificate, and travel expenses to the meeting.