Congratulations to the Team! They walked away with four golds and one silver at this year's event. Read more about it on the Physics Team's blog. 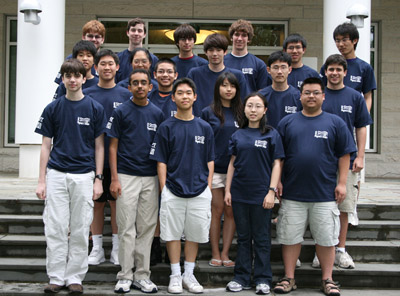 7/22/2009 - Defying all the research studies proclaiming that U.S. students lag far behind the rest of the developed world in science and math, the five student representatives of the United States Physics Team competed with teams of high school students from 70 nations and struck gold winning four gold medals and one silver medal at the 40th International Physics Olympiad held in Merida, Mexico in July of 2009.  They tied with India and Korea for second place overall in the medal count!

7/9/2009 - The travelers survived mini-camp, visited the Mexican Embassy, and are on their way to Merida, Mexico.  Photos have been posted on the AAPT Facebook page.

5/27/2009 - Five members of the team have been selected to represent the United States and the entire team at the IPhO. You can view the selected team members on the team page as well as view more information about the announcement.  Watch the 2009 Physics Team Camp slideshow.

5/22/2009 - The team has been attending the camp at the University of Maryland in College Park, MD. We have some photos of them and the activities they have been participating in on our Facebook photo gallery. View the photo album here (updated frequently).

4/29/2009 - AAPT is closely monitoring the flu outbreak in Mexico. Obviously, we don't want to see any of these promising young people put at risk. Neither do we want them to miss out on such an extraordinary opportunity. We will continue to plan for the 2009 Traveling Team to go to Merida. If the situation changes, we will notify the Team members. The following information is posted on the website of the International Physics Olympiad in Mexico:

Mexico City, April 27, 2009 - In relation to the recent news regarding the outbreak of swine flu in Mexico, at this time, there has been no reported cases in the City of Merida, where the IPhO 2009 will be held. Based on the information that we have received from Mexican health officials, we feel certain that this situation will be contained and resolved very soon. We are optimistic that the Olympiad will take place as planned and without any delay. The IPhO 2009 Organizing Committee will keep Delegations informed regarding future developments."