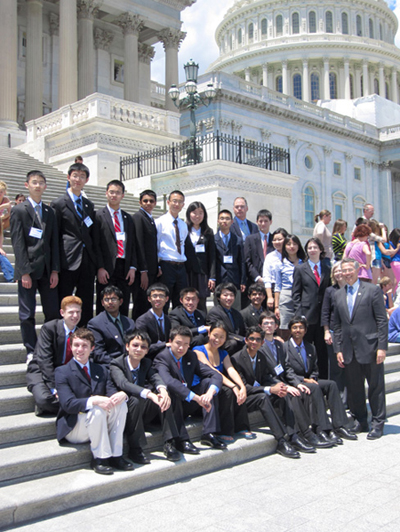 College Park, MD, May 5, 2012—While the eyes of the world will be focused on qualifying rounds and competitions for the Olympics in London, America’s best high school physics students will be training and competing in College Park, MD, later this month as they prepare for the 43rd International Physics Olympiad this July in Estonia.

Twenty students from across the U.S. have emerged through a rigorous exam process that began last January with approximately 3,600 students who participated in the Fnet=ma exam to become the 2012 U.S. Physics Team. These students will continue to train for the mentally grueling exams and lab tests they'll face at the 43rd International Physics Olympiad to be held from July 15 – 24, in Tallinn/Tartu, Estonia, where more than 400 student scholars from 90 nations will test their knowledge in physics, competing with the best in the world. Over the past ten years, every U.S. Physics Team member traveling to the international competition has returned with a medal.

"The competition for a position on the U.S. Physics Team is intense and each student who participated in the 2012 selection process is deserving of recognition. They are the future of America's success in physics related fields. AAPT is honored to recognize the exceptional scholars who qualified for the team and to support their further participation in the International Physics Olympiad,” said Dr. Beth A. Cunningham, Executive Officer of the American Association of Physics Teachers.

An integral part of the U.S. Physics Team experience is the training camp. Most of the students invited to the camp are the top science student in their high school. For many, it is their first chance to meet other students who are truly their peers. The training camp is a crash course in the first two years of university physics. Students learn at a very fast pace. They have an opportunity to hear about cutting edge research from some of the community’s leading physicists. At the end of the training camp, five students will be selected to travel to Estonia for the international competition.

List of Events
June 3 — 2012 Physics Team members and coaches arrive at the University of Maryland for their intensive training camp
June 4 — Welcome Reception at the University of Maryland
June 6 or 7 — Congressional Visits
June 13 — Five students will be chosen to represent the U.S. Physics Team at the international competition
July 12 — Traveling Team and coaches depart for Estonia
July 15-24 — The International Physics Olympiad in Tallinn/Tartu, Estonia
July 25 — Team departs for home

About the International Physics Olympiad
AAPT began the program in 1986 to promote and demonstrate academic excellence. The International Physics Olympiad (IPHO) is a nine-day competition among pre-university students from more than 80 nations. The 2012 Olympiad will be held in Tartu, Estonia, from July 15-24.
U.S. Physics Team Selection:  AAPT is responsible for recruiting, selecting and training the U.S. Physics Team each year to compete in the IPHO Competition. This selection process begins in early January when high schools register their students to participate in the Fnet=ma exam. Approximately 300 top scorers on this first test will advance to the Semifinal round of competition.
A second exam is used as the basis for selection of the 20 members of the U.S. Physics Team. In May these students will travel from schools all over the United States, to the University of Maryland-College Park for the U.S. Physics Team Training Camp. There, they engage in nine days of intense studying, mystery lab, daily exams, and problem solving.
At the end of that training camp, five students and an alternate will be selected as the "Traveling Team" to represent the United States at the IPhO. In July, the Traveling Team and their coaches will attend a three day Mini Camp of intense laboratory work before moving on to the IPhO.

Funding and Sponsorship
Funding for the U.S. Physics Team is supported through donations from concerned individuals and organizations. Contributions are entirely used to support the selection, training, and travel of the team. Donations to the U.S. Physics Team are accepted at www.aapt.org/physicsteam/donate.cfm.
The U.S. Physics Olympiad Program is a joint initiative of AAPT in partnership with the University of Maryland Physics Department, the Joint Quantum Institute, and the member societies of the American Institute for Physics (AIP): Acoustical Society of America, American Association of Physicists in Medicine, American Astronomical Society, American Crystallographic Society, American Geophysical Union, American Physical Society, AVS, Optical Society of America, and the Society of Rheology.

About AAPT
AAPT is the premier national organization and authority on physics and physical science education —with members worldwide. Our mission is to advance the greater good through physics teaching. To this end, AAPT provides our members with numerous opportunities for professional development, communication, and student enrichment. We serve the larger community through a variety of programs and publications. AAPT was founded in 1930 and is headquartered in the American Center for Physics in College Park, Maryland.