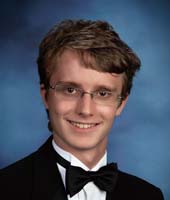 I have enjoyed mathematics and mathematical puzzles for as long as I can remember. As a toddler, I loved jigsaw puzzles, and I would spend hours playing computer puzzle games. Once I could read and write, I used to work my way from cover to cover through Mathmania and Puzzlemania magazines each month. Eventually, I discovered Martin Gardner’s books, which I love to read to this day. (One year for Christmas I got the whole set of eleven books based on his Scientific American columns.) Also, at some point in my childhood I got ahold of Arthur Benjamin’s DVD’s on the Joy of Mathematics and Discrete Mathematics, which I watched over and over.

In fourth grade, I got my first taste of math competitions in the after-school math club. We participated in the Maryland Online Math League and also the Elementary Math Olympiad. In middle school I attended Montgomery County’s Math, Science and Computer Science magnet program at Takoma Park MS, and I continued to compete in contests such as the American Math Competitions (AMC). I also participated in MATHCOUNTS, and in eighth grade took part in the national competition as part of the Maryland team.

I didn’t really get exposed to physics until high school, where I continued in the math-science-CS magnet program at Montgomery Blair. In that program, we took physics freshman year, but I first started to get truly interested in physics in my junior year, when my friend Mike Winer (a 2014 IPhO silver medalist) convinced me to join the physics team. Between that and taking calculus-based physics this year, I have come to love physics almost as much as I love math. I have also continued my pursuit of puzzles, with my favorite being the monthly online Shinteki competition, where a group of friends and I regularly try to beat out our teachers and other student teams, who also like to compete.

My favorite part of physics is the problem-solving aspect of it. I like that every problem is governed by a set of rules, and by following those rules and figuring out how to apply them to the situation I can arrive at the answer.