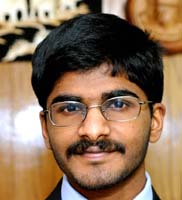 I have always felt curiosity toward science since a young age. Science has been my favorite subject since starting school, and in fact I was disappointed when starting elementary school to discover that science class would only be once a week. I still devoted a great deal of time to learning new things at home as a hobby.

Surprisingly, math initially did not appeal to me. I did not realize its use for things other than simple but tedious addition and multiplication problems. However, this attitude changed dramatically in my fourth grade, when I joined the Math Olympiad for Elementary Students as an after-school activity. There, I was first introduced to the idea of using mathematics creatively to solve interesting, unusual problems that seemed harder than they actually were. For example, I realized that to add all the integers from 1 to 100, instead of adding everything one by one I could just make 50 pairs of numbers each adding to 101. Since then, I have enjoyed the thought process in both math and science.

In middle school, a group of friends and I began preparing independently for the Science Bowl. I was at first not as interested in physics as I was in other subjects, because I got the impression that it just described the obvious motion of stuff like bowling balls and athletes with basic equations. But as I studied the subject deeper, I began to particularly appreciate it. I came to realize that physics could explain various complicated and interesting phenomena accurately and quantitatively. It was not just restricted to moving footballs, as the simplified basics suggested, but also dealt with the functioning of nuclear weapons, transistors, optical devices, and molecules, and even the footballs could be analyzed deeper with a myriad of potentials, torques, and nontrivial differential equations. I was also captivated by the various real-life applications of physics, such as using hydrogen fusion to solve the energy crisis.

Now, physics is definitely one of my favorite areas of science. I often spend free time working on challenging physics problems, many of which are from the Soviet popular science journal Kvant (through which I also teach myself Russian). I have also begun to explore more modern topics. I had the pleasure this summer of conducting experiments myself to discover intriguing properties of ferroelectric perovskites. It continues to fascinate me to consider everything in terms of quantum states’ probability distributions and to rework my entire conception of basic physics at the relativistic scale. I have come to realize that physics is a dynamic field involving a great deal of problem solving and critical thinking, and it is one I will eagerly pursue in the future.

I'm looking forward to an exciting two weeks with the physics team, as well as the many great adventures in physics that await. I also thank my family, friends and teachers for their support and guidance in their continued support thus far.