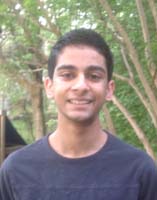 Life throws unexpected things at you.

Back in 4th grade, I would never have dreamt of pursuing physics. I was quite the avid collector: bugs, berries, flowers, rocks, etc. I picked up everything that piqued my interest. Unfortunately, math was not one of those subjects. I struggled to understand “order of operations” in 5th grade, and was defiant about becoming some type of doctor. I was nothing short of a naturalist.

Life pitched a fast one at me during 6th grade. My teacher was especially stringent, horribly unreasonable, and incredible capricious. Yet, I had to take the good from the bad. Soon enough, I realized how 5-hour worksheets increased my capacity to focus and perfect. As I became more detail-oriented, my illustrious boxes of collections started to lose their meaning.

Slowly and surely, my life goal as a doctor waned in the interest of my now developing recognition of mathematics. I was able to solve contest math with relative ease, but something about it seemed too mechanical. It lacked direction, and I somehow became lost in the thickets of meaningless equations and statements. Abstraction was yet to reach its fullest influence on me.

To this day, I don’t necessarily find contest math meaningful. My perception of math was, however, drastically altered by physics. Having no initial interest in how things fall or move, I caviled at its inapplicability. However, copious practice and reassurance that what I was doing was actually useful started to pay off lavishly. Physics occurred to me as the byproduct of concreteness and abstraction. It explained things not too vaguely nor rigorously. I found middle ground in my quest for knowledge.

Fortunately, my world doesn’t begin or end with physics. I sought to ramify my interests early on in life by learning how to play the violin and doing origami. As I progressed through these artistic forms, I tried to develop connections to my other interests. I realized that art is surprisingly mathematical in nature: origami-math is a nascent topic that yields important innovations such as airbags, protein-folding equipment, and collapsible space constructs. Inspired by the wealth of applications in origami, I realized that diversity is opportunity. Digging deep in remote corners, exploring obscure cracks and crevices… this is what drives innovation. The fascination with the unknown.

I continue to delve deep into the unknown. And I owe it all to my parents, my teachers (especially Dr. Dell, Dr. Osborne, and Dr. Sophia Economou), and my friends. These wonderful people have inspired me to learn and to teach. Sharing my passions with my peers has been as exhilarating as discovery.

Life throws unexpected things at you. I wonder what it is yet to throw at me.