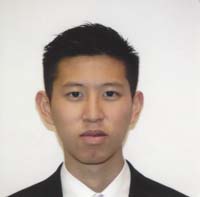 Physics first entered my life during my first airplane ride. Face pressed against the cool glass of the window, I watched in awe as the plane rumbled down the runway, turbines roaring ever louder, until the plane slowly escaped the confines of the Earth. Although it would be several years before I could state the physics behind the phenomenon I witnessed, I knew immediately that whatever force had lifted me off the ground had the potential to change my life.

I would not be introduced to physics until much later, but my scientific inquisitiveness quickly led me into the world of competitive mathematics. In sixth grade, I was introduced to the MathCounts competition and the AMC competitions. Although success came slowly, I became enamored by the intense problem solving and incredible ingenuity that went into these competitions. More valuably, I made lasting friendships with others who were equally interested in mathematics and science. Through diligent work, I had placed high within the my State MathCounts competition and had qualified for the AIME twice by the end of my middle school career.

My first true introduction into science came when I joined my middle school’s Science Olympiad team. At first, I dabbled in each and every discipline, choosing the events that seemed the most interesting (or had the coolest names). Although I had some degree in success in many of my events, I particularly excelled at the ones involving physics - in particular an event on circuits and one on thermodynamics. However, by the time I had made this realization, my middle school Science Olympiad career had come to a close.

In high school, I first did not make it onto my school’s Science Olympiad team. Recovering from this defeat, I redoubled my efforts at studying physics, spending countless hours reading through my physics book. My efforts paid off when I qualified for the semifinals from the F=ma competition in my freshman year. However, my greatest growth in physics occurred when I took Physics C at my school. Not only was I introduced to calculus based physics, but I was also shown the beautiful way in which different concepts in physics are interconnected. My performance on both the F=ma and the semifinal exams improved significantly as I was introduced to more physical concepts. After exhausting the physics curriculum at my high school, I was permitted to take classes at nearby Cal State Fullerton to further my knowledge of physics. The many physics courses I took there served to both deepen and broaden my grasp of physics.

My achievements to this date cannot be attributed to myself alone. Without the support of my family, my mentors, and my friends, I could not have possibly could not possibly have gained the same passion and understanding of physics that I do. I’m incredibly excited to attend this camp and hope that it will provide me with exciting new experiences and knowledge.