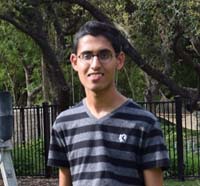 Honestly, I’m excited and honored to be here. But it’s not where I would have envisioned myself just three years ago. Not that physics didn’t interest me. It’s just that I wasn’t aware of all the depth of all the physical phenomena out there. And of course, back then I don’t believe I knew what the US “Physics team” was.

I’ve always been interested in math and science. But that’s understandable. My parents have always encouraged such pursuits since my elementary school days. Many of my friends elected to take the highest levels of math and science available at my school. With my parents’ assent, I naturally followed suit. It was that simple.

I was always curious. Word processing programs, Excel, fans, sports—all of them made sense after some fiddling around. I loved to read. Mysteries, children’s fantasy, adventure—put it in front of me and I would devour it. Science fiction, as well. I remember being immensely intrigued by Asimov’s Foundation series back in fifth grade. It’s a shame chaos theory seems to preclude the development of psychohistory in our world today.

In middle school I joined two clubs that became very influential in shaping my perspective of what math and science could be: Math Counts and Science Olympiad. While I can’t say I was anything more than an amateur given my impressive competition, dabbling in Math Counts led me to doing research and discovering AOPS and realizing there was more to math problems than, “Bob has 5 more apples than John…” Science Olympiad was my first introduction to physics involving math more complicated than F=ma.

After I came to high school, everything happened in a blur. I took a liking to my introductory physics course and on my teacher’s recommendation, took the F-net=ma exam. I participated in the AMC series as well. My luck balanced out: I qualified for the physics semis by a question but missed AIME by a question. But I began to put value in these subjects in their own right. I developed my knowledge of these subjects alongside my continuing fascination with computer science. But the real transformation came when I bought myself a copy of Resnick and Halliday. I can honestly say that much of my physics knowledge flows directly from its covers.

Overall, I believe that I essentially stumbled my way to the US Physics Camp by following what seemed interesting, using Google and the resources available to me, and taking advantage of opportunities I was given. Motivation helps, as does intellectual curiosity. More importantly, so do good teachers. I have been fortunate to have had the support and encouragement of my physics teachers Dr. Poche and Mrs. Matney in pursuing my ambitions and search for knowledge. To them I would like to address a sincere “thank you.”

And here I am! I look forward to meeting my fellow campers.