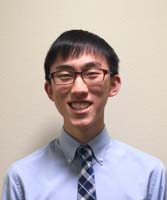 I’ve always been driven by an innate curiosity to find patterns and to learn how things work. Math and science have provided the outlet for me to pursue my interests. My fondest memories as a child include solving Sudoku puzzles, playing with Rubik’s cubes, and building rollercoasters out of Legos and K’nex (which at the time, were nearly as tall as I was).

It wasn’t until I was introduced to MATHCOUNTS and the AMCs in 5th grade that I began to realize there was much more to math than knowing a lot of formulas or performing calculations quickly. I still remember the first AMC8 problem I ever encountered. It took me an entire afternoon to come to the solution since I wasn’t familiar with complementary counting. But after several hours of scribbling and crumbling pieces of paper up in frustration, I felt an excitement at solving the problem without help, an excitement that I couldn’t easily find outside of these competitions. What struck me initially, and eventually motivated me to participate in these competitions, was the creativity needed to solve these unusual problems. It was refreshing to find problems that were challenging and rewarding that sharply contrasted with the tedious and repetitive “How many chickens and pigs are on the farm if there are 24 animals and 40 feet in total?” questions.

I first became interested in learning physics because of its similarities with math; both require a great deal of problem solving and a high level of creativity. Despite my strong background in math, I initially found physics difficult and frustrating. I struggled to make connections between different ideas to solve problems. However, my experiences with math competitions helped fuel my perseverance and determination to improve. By spending time watching videos from MIT’s OpenCourseWare, reading Feynman’s Lectures, and working through textbook problems, I gained a deeper understanding of the concepts that underlie physics and its ability to explain natural phenomena. Learning physics has broadened my perspectives and enabled me to understand how things work at a fundamental level, something I have strived to do from an early age.

In particular, I would like to thank my physics teacher, Mr. Smay, for inspiring me to explore physics at a deeper level with his demonstrations, his occasional antics, and his incomparable sense of humor. I would also like to thank my family and anyone who’s ever helped me with physics for all their support, without which I would not be where I am today.

I’m honored to be invited to the team, and I look forward to meeting everyone and having an exciting week and a half at camp!