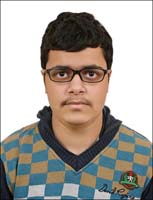 I have had an interest in Mathematics ever since I was in elementary school. This interest in Mathematics probably sparked my later interest in Physics. As I grew older, I started becoming curious about the world around me. I watched documentaries and read articles on the internet on various fields of science. Initially, I was mainly interested in chemistry. I was intrigued by how almost everything in the universe is made out of small, mysterious particles. However, I later realized that most of the aspects of Chemistry I was interested in were more closely related to Physics.

When I was in my sophomore year, I studied first year university level Physics from a textbook that I somehow got my hands on. I was fascinated by the way some simple laws govern almost every event in the Universe. Around this time, I also became interested in mathematical problem solving. I started spending a lot of time solving problems in Algebra, Number Theory and Combinatorics. Even though progress was slow at first, the process was intellectually rewarding. The satisfaction I got after solving a difficult problem was definitely worth the frustration and time devoted to it. A few months later, I came across some problems from the USAPhO. I found the problems to be very interesting (even though I had no clue how to solve them at that time) and decided to take the F=ma exam that year. I prepared myself with the help of my Physics teacher in school, and even though I didn’t make it to the team, I learnt a lot while preparing, and the journey was extremely rewarding.

The next year, I started solving more difficult problems in Physics, and studied topics such as Special Relativity and Multivariable Calculus. I also developed new interests in algorithmic programming and astronomy.

I am very excited to be part of the US Physics team. I look forward to utilize this opportunity to enhance my knowledge of the subject, to interact with some eminent physicists,and connect with some of the most talented Physics students from all over the United States.

I want to thank my Physics teachers Mr. Alok Kumar and Mr. Shyam Sainani for their constant encouragement and support (and an endless supply of interesting problems), my parents for their patience and guidance, and last but not the least, Amity International School, NOIDA for providing me the platform and the infrastructure to participate in international competitions.