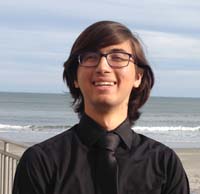 From early on, music, math, and science have been my passion. It was in the first grade when I discovered the beauty of math through The Penguin Dictionary of Curious and Interesting Numbers by David Wells. At age 5 when googolplex was the coolest thing, this book introduced me to a world of numbers that have significance based upon patterns and properties rather than solely the number of digits. It was also in the first grade when I was introduced to the scientific method. My parents fondly recount how my excitement and passion for my first grade science fair project brought my teacher to tears. I designed and conducted an experiment investigating how the number of coils and applied voltage affect an electromagnet’s strength. I was thrilled by using the scientific method and learning that the Earth’s magnetic poles are located near their opposing geographic poles. In elementary school, I indulged in science beyond classroom through two other science fair projects: one on factors influencing fruit and vegetable batteries and the other on investigating the rotation of the Sun using SOHO data on sunspots.

In middle school my passion for science continued with my participation in Science Olympiad. Since 7th grade, Science Olympiad has given me the opportunity to acquire knowledge in topics outside of school curricula by studying at my own pace. Furthermore, Science Olympiad has helped me develop life skills to meet challenges one faces doing research, manage things going wrong in the middle of competition, and work with others to solve complex problems.

My formal introduction to physics was a 19-day intense summer program, learning as much physics as one can with only algebra and geometry. My teacher, Brian Hastings said, “Life is a game, and physics are the rules. It’s a lot easier to play if you know them.” Learning about force, momentum, and projectile motion was really learning the rules to life. Things like diffraction and electric motors were a little beyond my pre-high school intuition, and were more easily classified as magic.

Special relativity, the first biggest physics magic, was conquered in another 19-day session taught by Yury Deshko who said, “Pure mathematics is not for us humans, not yet.” I am here, despite finding pure mathematics beautiful, because I am relatively better at wrapping my head around physics problems than learning tricks useful only in competition math.

My enthusiasm for physics could not have been nurtured more if it weren’t for my Science Olympiad coaches: Jamie Suarez who told us to “Go be awesome,” and Greg Byrd - also my AP Physics teacher - who taught us that, “Inductors…OPPOSE the change.” But we’re not inductors. Things change and we are able to adapt. And that is how we will go be awesome.