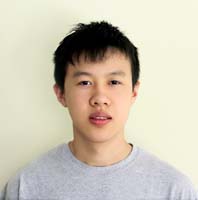 From an early age, I’ve been interested in how things work. Once I got bored of playing with toys, I would often take them apart with a screwdriver to see the gears and motors that made them work. As a child, I took apart everything from old computers to disposable cameras. Children’s encyclopedias intrigued me, and I especially loved to read explanations of scientific phenomena, such as lightning and volcanoes. Naturally, this curiosity about how things worked drew me towards science and math. I enjoyed learning math and the sciences because they were universally true, and answered many of my “what if” or “why” questions. When I learned of my middle school’s Mathcounts and Science Olympiad programs in sixth grade, I was naturally compelled to join. These two programs provided me with my first introduction to math and science contests.

Later on, I ultimately began to appreciate math and physics for their shared problem solving aspect. I discovered that hard problems were usually solved by clever applications of simple techniques, and I found it highly enjoyable to work on and solve problems because of the creative process involved. Although I never did particularly well in any middle school math contests, they laid a solid foundation for my future pursuits in problem solving.

Physics also appealed to me because of its simplicity and its ability to explain a wide range of phenomena with a small set of fundamental concepts. When I first learned about the F=ma exam in eighth grade, the problems on the exam looked formidable at first. However, I eventually recognized that the problems were surprisingly accessible, and that their solutions could be distilled to several basic ideas. The F=ma exam differed from my previous experiences with science competitions in that the exam focused on the application and interpretation of formulas, rather than simply memorizing or knowing facts or equations.

I would like to thank everyone who has helped me get to this point. In particular, I am very thankful to all of my teachers throughout middle and high school, especially Ms. Buckley, my Science Olympiad coach in middle school, for sparking my interest in science and learning. I am also indebted to my parents, who have taught, supported, and encouraged me every step of the way. Without these individuals, I definitely would not have made it this far!

I’m very excited to be invited back to camp! Being a part of the team last year was a phenomenal experience, and it allowed me to deepen my understanding and appreciation for physics while spending time with the amazing coaches and other campers. I’m looking forward to reuniting with some of last year’s team members, as well as meeting the new ones!