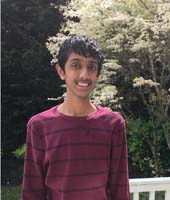 My physics journey began in 7th grade. Before then, I was the typical math-focused student who took a few advanced math classes and participated in various regional math contests. I had little true interest in the subject and little motivation other than grades and exams to continue my studies. Then, I picked up Deep Down Things by Bruce Schumm. Slowly but surely, the book began to transform me. I devoured it voraciously, staring for hours at its detailed explanations of phenomena in particle physics. It fascinated me that everything in the universe could be constructed from a handful of building blocks, all of which were neatly encapsulated in the Standard Model of Particle Physics.

Nevertheless, when I finally finished the book, I was somewhat dissatisfied. I knew that Schumm deliberately withheld many details in order to make the material more accessible, and I could not accept not knowing the full story. I decided, once and for all, that I needed to fortify my mathematical background before I could do any further research, so I taught myself elementary calculus that summer. At this point, the mathematics itself was enthralling enough, and I began to pursue math as a subject in its own right. However, my connection with the world of physics remained intact: for a 8th-grade National History Day project, I chose to research the life and scientific work of Richard Feynman. Over the course of this project, I discovered his world-famous undergraduate lectures, and I pored over them for hours and hours.

Over the next few years, I continued to read more and more physics: I began to foray into more advanced topics like quantum mechanics and thermodynamics. However, what fascinated me the most was Einstein’s theory of general relativity. I had heard, from popular science television and magazines, that general relativity described gravitation as the curvature of spacetime. However, I had no idea what this actually entailed until I began to read Spacetime and Geometry, a fully mathematical introduction to the subject. As soon as I plunged into the book, I was enthralled: Could it really be true that gravity was nothing but a geometrical feature of the spacetime in which we lived? It was remarkably rewarding to finally understand a concept after staring at the same pages for an hour.

In addition to math and physics, my other love is running. I have run cross-country since 3rd grade, but I only started seriously racing in 8th grade. For both cross-country and track and field, I have been on my high school’s varsity team for both sports. Participating in sports such an amazing social experience, and I would say that the cross-country team is one of the most tight-knit and supportive sports teams at our school. Many of my friends are fellow runners. Running provides a much-needed break for me from my intense academic life, and I have often found that I hit upon the solution to a difficult problem after going for a long run.

This was my first year taking F = ma and USAPhO. Although I had little experience with physics competitions, I was able to reap the rewards of my extensive physics studies in a test setting. Moreover, my experience with math competitions (including the USAJMO) allowed me to hone my problem-solving skills. To my parents and my physics teachers, Ms. Heather Butler and Mr. Sean Stewart, I owe a huge thanks for having supported my physics education over the course of high school, and to the math team coach, Mr. Dean Ballard, I am extremely grateful for having administered the F = ma and USAPhO exams. I feel very honored to have been selected for the US Physics Team, and I am very excited to attend the summer camp!