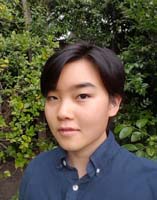 I’ve been fascinated with the universe ever since the solar system still had nine planets. My first interest was astronomy, which naturally led to an equal fascination with the orbits of electrons in atoms. For a long time, I imagined that perhaps the earth is an election and we’re all living in a piece of someone’s lunch.

In 6th grade, I discovered The New World of Mr. Tompkins, a story about an ordinary man launched into the wild world of relativity and quantum physics. I was hooked on the idea that we live in a 4-dimensional world and that the universe makes logical sense no matter how it is viewed. Later on when I learned to derive Lorentz’s transformations and Einstein’s E=mc2, my concepts of relativity all fell into place. With an understanding of relativity, I intuitively understood the concept of magnetism and the relations described in Maxwell’s equations before I knew the math behind them.

During middle school, however, my main interests were math and history. In 9th grade, I began teaching the middle school math club and joined a few clubs. With a busier schedule, I had to give up history competitions and debate, two time-consuming activities I loved. I didn’t have time to learn physics, either. In middle school I had only taken a year of science, which partially covered physics. Out of curiosity, I took F=ma but missed the cut off by a few points. In 10th grade, I made semifinals. Though I hadn’t seen any semifinal problems, I managed to scrape together an Honorable Mention and I immediately knew I could do well the following year. There were many completely blank spots in my knowledge, but the concepts and problem solving didn’t seem too remote.

In 11th grade, I finally took AP Physics. I had always preferred reading about concepts over practicing problems, but the class finally forced me to put pencil to paper and actually solve some problems. I also systematically read through electricity, magnetism, relativity, quantum mechanics, and thermodynamics. Combined with my ease with calculus, I made the US Physics Team without spending too much time preparing.

I would like to thank the physics teachers at my school, Mr. Geschke and Mr. Van Deusen, for teaching us physics and making physics competitions a school tradition. I would also like to thank my principal Mr. Larsen and all my teachers for letting me take time off school to attend the camp. I look forward to meeting new friends and learning new things in physics.