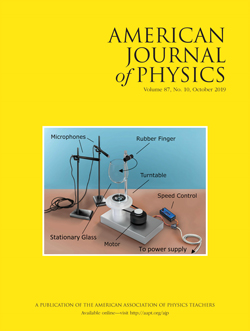 The Fourier spectrum of a singing wine glass

The phenomenon of the singing wineglass is familiar to many. Most people have run a finger along the rim of a wine glass with the right speed and pressure to get it to whistle a tone or perhaps heard a glass harmonica being played. However, have you ever noticed and wondered why the vibrations caused by a finger on a glass produce a pulsating sound, rather than a steady, constant-amplitude vibration? Further exploration reveals that the sound and pulsations of a wine glass vary depending on the way the wine glass is stimulated. In this paper, we investigate and model the characteristic sounds produced by three different cases: the pulsating sound exhibited by a finger run along the rim of a wine glass, the steady tone produced by a stationary finger on a rotating wine glass, and the decaying pulsations exhibited by a struck rotating wine glass. Analyzing the qualitative differences among these three cases provides opportunities for students to hone experimental, modeling, and data analysis skills in an intermediate level undergraduate experimental physics course.

BACK OF THE eNVELOPE

Cycloidal paths in physics as superpositions of translational and rotational motions by David C. Johnston. DOI: 10.1119/1.5115340.

Variation of the apparent size of the Sun visualized with basic photographic equipment by Peter Trillenberg. DOI: 10.1119/1.5119510.