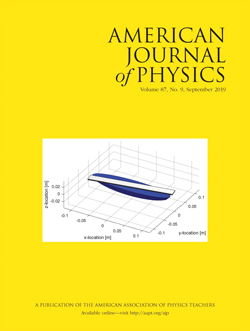 Rattlebacks for the rest of us

Rattlebacks are semi-ellipsoidal tops that have a preferred direction of spin (i.e., a spin-bias). If spun in one direction, the rattleback will exhibit seemingly stable rotary motion. If spun in the other direction, the rattleback will being to wobble and subsequently reverse its spin direction. This behavior is often counter-intuitive for physics and engineering students when they first encounter a rattleback, because it appears to oppose the laws of conservation of momenta, thus this simple toy can be a motivator for further study. This paper develops an accurate dynamic model of a rattleback, in a manner accessible to undergraduate physics and engineering students, using concepts from introductory dynamics, calculus, and numerical methods classes. Starting with a simpler, 2D planar rocking semi-ellipse example, we discuss all necessary steps in detail, including computing the mass moment of inertia tensor, choice of reference frame, conservation of momenta equations, application of kinematic constraints, and accounting for slip via a Coulomb friction model. Basic numerical techniques like numerical derivatives and time-stepping algorithms are employed to predict the temporal response of the system. We also present a simple and intuitive explanation for the mechanism causing the spin-bias of the rattleback. It requires no equations and only a basic understanding of particle dynamics, and thus can be used to explain the intriguing rattleback behavior to students at any level of expertise.

Determination of aerodynamic drag coefficients using a drop test with a wireless accelerometer and its application to model rockets by  Simon Pettersson Fors, and Carl Nord.  DOI: /10.1119/1.5121281

Reciprocity principle and relative accelerations in the theory of relativity by  Reza Rashidi, and Fatemeh Ahmadi.  DOI: /10.1119/1.5115338