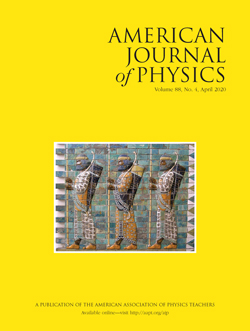 The Persian Immortals: A classical case of self-organization

We present an example from classical history that perfectly illustrates the concept of a self-organizing system, namely, the “Persian Immortals” described by Herodotus. Their name refers to the fact that their number was always kept constant (at 10 000) by instantly substituting every warrior who fell during a battle. One evident advantage of this was to undermine the morale of the enemy troops. Here, we focus on a second major benefit, namely, that the Immortals—thanks to the replacement tactics—were actually becoming a stronger unit in the course of the battle. Modeling the substitution of the fallen ones by a plausible set of replacement rules, and using Order Statistics to analyze the evolution of the unit's fitness, we show that the distribution of fighting skills will ripen to a robust and favorable equilibrium state.

The motion of a conical pendulum in a rotating frame: The study of the paths, determination of oscillation periods, and the Bravais pendulum by José A. Giacometti. DOI: 10.1119/10.0000374

Geodesy on surfaces of revolution: A wormhole application by Lorenzo Gallerani Resca and Nicholas A. Mecholsky. DOI: 10.1119/10.0000464