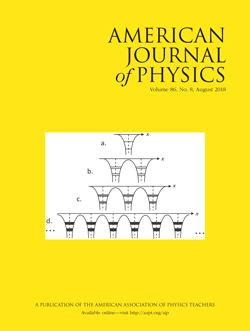 Electrons in an atom are confined to distinct, quantized energy levels. When atoms form solids, the interaction of the electrons causes their energy levels to split into multiple closely spaced levels, or bands, separated by forbidden regions called band gaps. Each band contains a number of energy levels equal to the number of atoms in the solid. This model of the origin of band structure can be reproduced by using a classical array of harmonic oscillators (masses connected by springs). In this system, each oscillator plays the role of an atom and its resonant frequencies play the roles of electronic energy levels. When coupled, a system of oscillators yields a spectrum of resonant frequencies and when the number of oscillators becomes sufficiently large, the system exhibits the formation of “resonant frequency bands,” similar in structure to the energy bands of an atomic solid. We experimentally demonstrate band formation using coupled harmonic oscillators and highlight the effects of both number of oscillators and coupling strength on the band structure. Additionally, we show that experimental results of this band formation follow a theoretical analysis of the system.