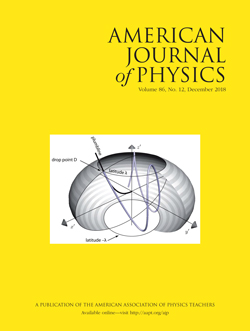 Free falling inside flattened spheroids: Gravity tunnels with no exit

A “gravity tunnel” is the name given to a fictitious deep shaft drilled inside the Earth so that objects dropped from the surface of the Earth would free fall without ever touching the walls. It is well known that because of the rotation of the Earth, such tunnels are not straight lines but instead they emerge westward of the antipodal point, when the Earth is approximated as a rotating sphere. In this article, we determine the shape of gravity tunnels by taking into account the polar flattening of the Earth resulting from its rotation.

Foundations of Quantum Mechanics: An Exploration of the Physical Meaning of Quantum Theory by Tim Maudlin.  DOI: 10.1119/1.5050194