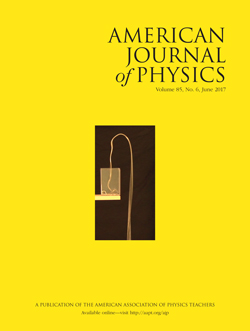 AAPT announces that Richard Price, Massachusetts Institute of Technology, will assume the position of Editor for the  American Journal of Physics in September 2017, following the term of David P. Jackson.
Read more.

Letters to the Editor

Measuring the spatial resolution of an optical system in an undergraduate optics laboratory by Calvin Leung, and T. D. Donnelly. DOI: 10.1119/1.4979539

On the origin of energy: Metaphors and manifestations as resources for conceptualizing and measuring the invisible, imponderable by Benedikt W. Harrer. DOI: 10.1119/1.4979538

Epistemic beliefs of non-STEM majors regarding the nature of science: Where they are and what we can do by Shannon D. Willoughby, and Keith Johnson. DOI: 10.1119/1.4979654