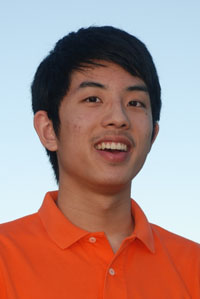 When I was very little, my two favorite activities included counting on my fingers over and over again and playing with a little four-function calculator that my parents gave to me, namely by adding one over and over. I especially loved getting puzzle books and doing the logic puzzles.

In fifth grade, I was seriously considering that I take orchestra in middle school, but by a stroke of good fortune, I attended a "Family Math Night" at my elementary school where I learned of a contest math class that I could take. I quickly enrolled in it and was exposed to competition math early. I was very enthusiastic and learned all sorts of tricks and concepts from my coach and my peers. Most motivating to me was a brilliant eighth grader who had made Mathcounts Nationals the year before and was absolutely amazing at all the competitions we went to throughout the year. His talent encouraged me to work really hard, yet I still amazed myself when I made Nationals during my first year. I really enjoyed math then, so I kept practicing. Luckily, my efforts still paid off when I finally won the Mathcounts National Competition in my eighth grade year, and I gained a lot of confidence in myself.

Eventually high school came, and I was exposed to many opportunities other than math. During freshmen year, I also got involved in other activities like orchestra, tennis, and programming games.

It was the summer after freshmen year when I became interested in physics. I was browsing through some physics problems from a local contest and, not knowing anything about the subject, began pondering a simple question about a ball bouncing off a wall. I then had a random urge to learn as much physics as I could. The urge persisted throughout my sophomore year as I excitedly learned from my physics teacher and my dad while reading on my own as well. This even sparked my interest in other subjects such as chemistry and algorithms. By the end of that year, I was pretty happy with becoming a Semifinalist in the Physics Olympiad.

This year, I did not take a physics class in high school, but I started spending a lot of time studying physics and becoming comfortable with applying the principles and formulas that I had learned. Again, my dad helped me a lot by providing me with challenging problems, textbooks, and other resources. Even though I did work hard this year, I was still thrilled to be invited to the team.

In general, I am a quiet and calm person; I'm very optimistic and believe that everything will work out in the end. I also really like the color orange. I love challenging myself with problems and learning new things, and I am excited to come to camp this year to learn more physics and meet others who share my enthusiasm!