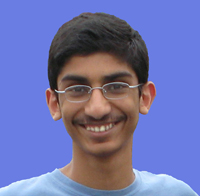 I guess I'm not the kind of person who can do homework while listening to my iPod; when I focus on something, it seems to demand my full attention. Origami, one of my passions, has taught me how meticulous precision can turn an ordinary sheet of paper into the classical paper crane, a beautiful rose, or for slightly more challenging purposes, the intersecting five unit tetrahedron. I also like to write my own music. The arduous process of entering numbers one by one into a MIDI sequencer (I use a program called TabIt) can turn a mere collection of computational data into a lively musical composition. Even though they are simply hobbies, I have always felt a sense of accomplishment after putting an undivided effort into my projects and testing the limits of my potential.

Perhaps this is why I was naturally attracted to physics. I first recognized this attraction when I received a past U.S Physics Quarterfinal Exam for practice. I realized that each problem required something other than a great deal of knowledge or a terrific memory-in fact, all the problems could have been solved elegantly using very little information. The challenge simply lay in finding the right perspective and applying those few laws that govern our universe.

It is absolutely thrilling to know that I can pursue this discipline as part of the U.S. Physics Team and I would like to thank Dr. Garg and Dr. Çakir, two teachers who have always encouraged me to do my best in math and science.

On another note, I have recently been trying to learn the acoustic guitar. Unfortunately, I can't seem to make too much sense of it yet. Wish me luck.