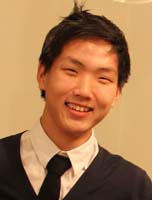 If I only had one word to represent myself, I would choose "curiosity". I wouldn't be surprised if half of the words I spoke in my childhood were why's and how's. When I was five, my parents, most likely exasperated by my endless questions, bought me the book, The New Way Things Work by David Macaulay, hoping to at least lessen some of my queries. Although I understood very little of the explanations of complex machines, electric circuits, or nuclear physics, I was nevertheless fascinated by the intricate diagrams and drawings that filled every page.

It was not until more than a decade later that this curiosity would manifest itself in a more advanced context. My father being a physics professor, I was naturally exposed to a variety of physics related opportunities. The summer after freshman year of high school, I worked as an intern in his applied physics lab. At this point, I had yet to take a course in physics. I struggled to understand the underlying concepts of the experiments I had carry out (although by the end, my understanding was still greatly limited). Nonetheless, I enjoyed my time that summer. I felt the thrill of finally contributing to the very concepts that captivated me at the age of five.

My first legitimate physics course took place in my sophomore year. Although introductory physics isn't offered to sophomores at my school, I desperately wanted to learn in order to improve my ability as a research intern. I self studied basic physics, with my dad's help of course, to place into AP Physics B. I learned that I had an aptitude in understanding physics concepts and solving problems. My friend suggested that I join the school's physics club that had just been created that year (and which he was coincidentally president of). It was through this club that I learned about and started preparing for USAPHO. The club met once a week, where we would solve and discuss various challenging physics problems. Unfortunately, that year I got terribly sick the week of the F=MA and was unable to take it. Afterwards, I vowed to prepare diligently and come back the following years.

It feels like quite a while since I made that promise. Since then, I've grown considerably, especially in my relationship with physics. I continued to research every summer and took classes both in and out of school to expand my physics knowledge. This year, I achieved my goal of becoming USAPHO finalist. The journey so far has only increased my interest in physics. Back in the lab, I now understand much more than I did that eventful summer three years ago, but this growth has only led me to realize how much I still have left to learn.