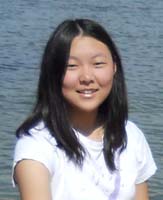 Unlike most people here, as a kid, I was more naturally talented in the humanities, especially in terms of reading skills and learning languages. At that time, I hoped to read all the books in the library, and my favorite pastime was going to museums. Thus, my math skills did not develop at a lightning-speed pace.

During middle school, I still spent the majority of my efforts on literature and social studies, but my math was not too shoddy. I definitely did not actively try to participate in math competitions; however, whenever my teachers would strongly encourage me to take math contests, I would do quite well. For example, on the AMC 8, I had earned a perfect score even after guessing on 2 of the questions. Most interestingly, during my middle school graduation awards night, I was guessing that I would get an award from literature, social studies, or Spanish. Instead, I received the math award in my class group of about 150 students, regardless that a Math Counts national winner was sitting next to me. That night, my math teacher said that I was "buried gold" and that I had great potential, which was really nice of him. (By the way, the math genius got the what-should-have-been-mine literature award. Now, we still joke about stealing each others' awards, and I believe that this is the only math award he never received.)

Also during middle school, I started developing my passion in astronomy. My eighth grade teacher had my class go outside at night and gaze at the stars. My teacher's interesting lectures as to why celestial bodies appear and move the way they do combined with the practical application of seeing these bodies really piqued my interest in physics because I saw how the laws of physics explained how the world, in this case, the stars, worked.

I started taking physics classes during my sophomore year. Luckily, my physics teacher, Mr. Birdsong, also helped solidify my passion in physics. Mr. Birdsong made physics very interesting by showing us cool applications, like showing videos of people burning tires with only friction. He also talked about and made jokes about major scientists in physics, like Newton or Faraday, which gave physics a very distinct personality.

It was a pleasant surprise that I got selected into the camp and I am excited with the opportunity. It will surely be a great honor and inspiring experience to work with exceptional students from all over the country and listen to physics lectures from great physics professors. In addition, I will enjoy visiting my birth state and living at University of Maryland, College Park, where my father got his Ph.D. in Electrical Engineering. I look forward to working smartly in the camp and having fun with my teammates.

I would like to thank my parents and the many people who supported me, especially Mr. Birdsong. Recently, my mom asked me, "After camp, do you think you will be majoring in Physics?" And I replied, "Who knows? The career interest survey said that my perfect job was an astronomer."