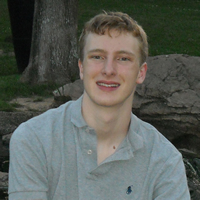 When I was in kindergarten, one of my first interests in math came when I overheard my mom explaining negative numbers to my older sister. My sister did not show much interest in this, but I loved the concept of a number that could "cancel" another number. I was even more excited when I learned that multiplication could also be inverted, and I tried in vain to explain this to my fellow kindergarteners.

I did not always enjoy math curriculum, but I loved any sort of puzzle problem that was available, so when I found out about MathCounts, I immediately became determined to join the local homeschool team. Improving my problem-solving skills until I could go to Nationals for two years gave even more encouragement.

Meanwhile, in my eighth grade physical science course I first saw physics as a way to predict the motion of any "system of objects." I enjoyed the idea of problems I could always solve; as long as I knew an object's initial state, finding a later position meant only applying a few basic vector and/or calculus operations. As I came to realize that simplified models did not always apply, I found physics only more interesting in the infinite possibilities of relativity and quantum mechanics. An extra chapter in my sophomore Honors Physics book introduced me to the basic relativistic effects.

The next year I took AP Physics C. I also took the F=ma and the Semifinalist exams for the first time but answered only about half of the questions. I resolved to work more quickly and confidently the next year after realizing the sentence I had written and erased was actually in the solution. The specific practice I needed in relativity came this year when my high school created a Modern Physics class for twelve interested students. I enjoyed the class, and it definitely increased my understanding of both large- and small-scale phenomena.

I would like to thank my parents for helping me to find MathCounts and supporting me in learning math and science. I would also like to thank my three physics teachers-Mr. Paquet, who showed me how seemingly hard Honors Physics problems "fall apart like a cheap suit;" Ms. Matney, who ensured that I will always know to use the right-hand and not the left-hand rule in AP Physics C and who gave me the opportunity to participate in the Physics Team competition; and Dr. Poche, who ensured that I "wasn't certain" about anything by spreading particles into a quantum mechanical wave in Modern Physics.

I am excited to meet the other team members at physics camp and hope to be able to have fun while learning new physics.