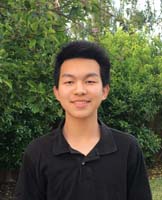 As with many of the finalists, my interest in physics stems from my participation in math competitions. And how did I get involved in math competitions? As a child, I loved science, and I knew that for my planned future career as a mad scientist, I would need to learn math. Physics is the result of putting math and science in a blender: two of my passions in one field, much like my other childhood dream of being an astronaut chef (though that didn’t pan out as well).

I’ve often been told that I’m patient and detail-oriented, which is most likely a polite way of saying I take forever to finish things. In the long-ago years before high school, when I had time to spare, I would spend hours shading scales in drawings of dragons or folding the feathers of origami eagles. This has stood me in good stead when solving physics problems; rather than tearing my hair out in frustration over the incomprehensibility of the solution, I use the incredibly useful tool known as the Internet to understand unfamiliar concepts (incidentally how I ended up reading The Feynman Lectures on Physics). Working on what starts out as a seemingly straightforward thermodynamics problem can lead to hours of trawling through webpages to understand the derivation of the Clausius Theorem or the different interpretations of entropy. Perhaps this isn’t the most efficient way of learning physics, but it’s both thorough and satisfying.

‘Why?’ was a question I asked every day as a child, second only to my exclamations of ‘no!’. Physics not only gave me the answers, but also explained why the answers made sense. No longer did I have to simply trust in the textbook when I could derive the equations for myself. To me, physics is the most elegant and all-encompassing of the sciences, able to describe vast multitudes of phenomena in a few (relatively) simple equations. Physics gives math a form in the real world; I learned calculus through studying physics, able to understand infinitesimals as tiny distances or volumes.

I would like to acknowledge my teachers, family, and friends for their support and guidance, and for standing by me through the years. Without their help, I never could have made it this far. Whether for the sound advice, constant encouragement, or friendly competition, I thank them for all that they’ve done, and I’m grateful to have such amazing people in my life.

As for the rest of the 2016 U.S. Physics Team, congratulations! I look forward to seeing both new and old faces this summer, and I’m honored to be a part of the team again.