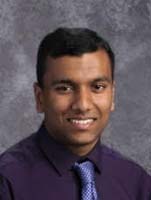 Since middle school, my life has revolved around math. After I joined my middle school’s Mathcounts club, it became my home within my school. I loved participating in local math competitions, and soon I qualified for the USAJMO. Through these competitions, I made friends with other people passionate about math and science.

I started learning physics in my freshman year of high school, as my school required physics for 9th graders, and I realized that I had a knack for the subject. Initially I did not think much about physics, but one thing I was amazed at was how an infinite charged sheet produced a uniform electric field. I didn’t believe my teacher, but when I put the integral into Mathematica, I was astounded to see that the value did not change for different heights above the sheet. Following in the footsteps of others in my school, I took AP Physics C in 10th grade, and it was there that I realized how interesting the subject really was, especially when I learned about Maxwell’s Equations in conjunction with my multivariable calculus class.

I got especially interested in science in 11th grade, because I had taken physics and chemistry already and I was learning biology. The catalyst for my interest was our school’s science bowl team. I studied hard in order to make the team, and continued studying afterward, and our team made the national competition. While our science bowl team gave me a reason to study science, it also made me realize how much there was to learn.

In my senior year, I had a profound shift in perspective. I realized that I had the ability to accomplish my own goals, rather than just vaguely try. I was always good at physics, but I never really tried to get better at it beyond what I learned in school. This year, I decided that I had the ability to make physics camp, and so I decided to pursue physics with the intention of making physics camp. I started learning thermodynamics and practicing on all the past USA Physics Olympiad exams. I also took a modern physics class at school, where I enjoyed learning about cosmology and the particle in a box model. My efforts paid off, and I am very excited to come to physics camp.

I would like to thank my teachers Mr. Montany and Dr. Allersma for introducing me to physics, and especially Dr. Nelson for his fascinating lectures that inspired me to delve deeper into the subject.