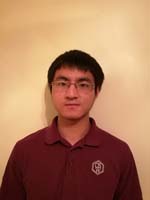 An eagle soars gracefully in the air, a perfect balance of lift and gravity. It dives towards the lake, snatching a fish with its talons as I imagine the circular waves, ripples, emanating from the point, reflecting off the edges to form beautiful patterns.

As the sun slowly sets, light of different wavelengths, scattered through a wider range of angles reaches us and the sky explodes in a myriad of color, from a deep ruby red to a brilliant violet.

People have long observed such natural phenomena, driven by an innate curiosity to understand. Thus the sciences began, and through careful, meticulous study, through accidental observations, we have acquired knowledge about our universe. Physics, in particular, explores everything at the most fundamental level, yet somehow, almost all of that knowledge can be reduced to just a few equations written in the completely man made language of mathematics. I find this fascinating.

From a young age, I have been curious about how the world works. When I was around five, I remember wondering about heat. At that point, I knew our stove was usually cool when off and usually hot when on, however, does it cool down immediately after being turned off? I set out to find out. One day after my mom finished cooking and turned off the stove, I snuck into the kitchen and put a finger on the stove. Ouch!

Almost right after I learned to read, I would devour science books at the library, but was in middle school, after being entranced by the documentary “The Fabric of the Cosmos” did I realize that physics promised to satiate the root of my curiosity. I marveled at the ways physicists described the fundamental workings of the universe and became intrigued at the unresolved conflict between quantum mechanics and general relativity. Soon enough, I was poring over physics books, trying to comprehend the equations describing reality.

Enter my high school years, where my physics teacher Mr. Stover immediately recognized my passion and gave me many resources to pursue my studies. I began to appreciate the world more and more as I understood what was actually happening, from why golf balls sometimes spiral out of holes to the causes of rainbows. Physics became an addiction as I strived to hone my intuition, to explain things I never noticed before.

I reflect on how the flight of birds, ripples in water, the setting of sun, and the shining of stars, beautiful in their own right, all fall under the domain of physics. How physics can explain all with few. Indeed, physics is just simply beautiful.

I cannot wait to discover more at camp and I look forward to meeting everyone.