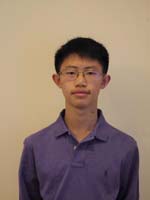 Math, physics, programming, game design, gravel (the tagging game where “it” has their eyes closed and can call “gravel”), and ice skating

When I was really young, I was the stereotypical curious child - always asking questions about the world around me, and always asking “why?” after my exasperated parents answered. Of course, I didn’t fit this mold perfectly - I apparently never asked why the sky was blue.

As you would expect from a physics nerd like me, the first thing I learned (after how to walk and talk and all that communication stuff) was... math. I have fond memories of counting the steps as I walked with my parents to our apartment on the eighth floor. I also have fond memories of missing numbers, or counting the same one twice. Eventually, my curious child side took over, and I asked a big question for a small child: “what’s the biggest number?” My mom, for lack of a better answer, said “infinity.” “Then what’s infinity plus one?”

Fast forward to middle school, when I joined math team, and turned out to be good at math! Quickly, math became my main hobby, and getting into the Maryland team for national MATHCOUNTS became my dream. On the side, I did Science Bowl. Somewhere along the line, I also became the “physics person” of our team, and had my first taste of physics. However, I wasn’t that good back then, and I lost us a crucial match because I couldn’t solve a basic kinematics question that any student in a high school physics course could answer in their sleep.

In 9th grade, I had my first high school physics course. At the same time, my parents suggested I sign up for the F = ma test, since my physics class wasn’t hard enough. One thing led to another, and I helped found the physics team at my school. That year, with a bit of luck, I qualified for USAPhO, and... I was not prepared. 3 hours of banging my head on problems later, I finished the test, telling myself I would do much better next year. Despite my poor performance, I was already hooked on physics. At some point, it had really clicked for me that physics described the real world. I could throw a ball, and it would follow my equations (and air resistance). I could build a circuit, and know how much current would flow through. I realized that literally everything I did (and everything everyone else did) was governed by physics.

Fortunately for me this year, I found another valuable resource: my school’s advanced physics classes, which included a course on thermodynamics and quantum physics. My physics teacher, Mr. Hanson, not only taught the quantum and thermo courses, but also presented a bunch of new concepts to me in an understandable way (and induced a few existential crises along the way).

Armed with this extra knowledge, I was able to do well on USAPhO, so it’s off to physics camp I go.