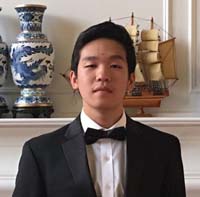 Nearly everyone begins their biographies by reminiscing on their infatuation with the science from a young age. However, I am unfortunately unable to do so simply because I was not relevant until I came to high school. Looking back on my middle school days, I can see clearly that I had absolutely no idea what I was doing, but when I went to high school, I was suddenly thrust into a crowd of so many talented individuals who excelled at science. And among all of these people, I chose physics as the science to study intently.

Of course, I’ve dabbled in the other subjects, but despite the many more practical applications of biology and chemistry, and the supposed elegance of math, I have decided that physics is the most profound. The brilliant thing about physics is how it can be derived from completely from a set of fundamental principles. Classical mechanics boils down to Newton’s three laws, special relativity is simply the statement that light travels the same speed in all reference frames, and thermodynamics can be summed up by saying every possible configuration of a system is equally likely. Yet from these basic statements and a little bit of math, I can obtain a clear view of the universe and all of its complex interactions. I can derive the position of a spacecraft in orbit around the sun, years into the future, I can predict what will happen as an object travels impossibly fast, and I can do many other impressive sounding things. Of course, getting from these basic principles to a complete understanding of the universe isn’t completely trivial, but I’ve had the opportunity of learning physics from a great many wonderful sources. David Morin’s Introduction to Classical Mechanics and Purcell and Morin’s Electricity and Magnetism both hold a special place in my heart being wonderful reads that changed my life. Other than that, I have to thank Mr. James and Mr. Stacy for being great physics teachers, but more importantly, my dad for being a truly deep well of physics knowledge that I could consult at any point to obtain a clearer understanding.

Last year, being a part of the physics team was the definite highlight. It was simply a wonderful experience talking and living with so many others who are so much better than me at physics. This year I look forward to meeting everyone and once again deepening my understanding of physics.