Preparation for the August 21, 2017 Solar Eclipse was an important part of the sessions and events held during this Summer Meeting. These included the Effects of the Sun: Solar Planetarium Show (Saturday, July 22,); Solar Fest (Monday, July 24), and the talk by this year's Klopsteg awardee, John C. Brown, 10th Astronomer Royal for Scotland.

The sessions, tutorials, and workshops cover all interests and levels from the novice to the experienced teachers. This year's plenary talks run the gamut from medical physics to policy outreach.

Cincinnati and Covington, across the Ohio River from each other, contain various points of interest and fun things to do, including numerous museums, restaurants and breweries, entertainment venues, and the Great American Ball Park, home of the Cincinnati Reds.

AAPT/PTRA held its Summer Leadership Institute July 19-22 at the Cincinnati State Technical College. The Summer Institute provides annual training that focuses on updates in pedagogy, technology, and content. This professional development for the leaders allows the participants to become certified in specific content areas that they may then offer to peers in their own district or state.

The University of Cincinnati Blue Ash College hosted more than 20 physics professors from across the U.S. to the New Faculty Experience (NFE) Commencement Conference July 21–23. The meeting was designed to help newer physics professors explore research-based instructional strategies (RBIS) that help effectively teach physics and astronomy. During the Summer Meeting the Two-Year College Leadership hosted a breakfast and a resource room that focused on the issues and needs of the two-year college physics teaching community. The Committee on Physics in Two-Year College hosted workshops and sessions including a panel session reporting on the Two-Year College New Faculty Experience funded through NSF.

American Journal of Physics Editor, David Jackson, was recognized for his years of service at a special presentation held during the AAPT Publications Committee. 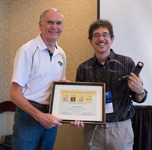 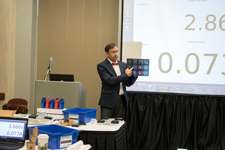 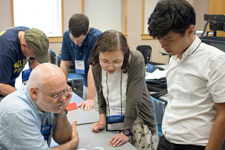 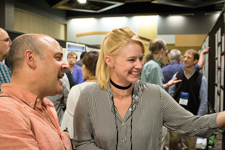 Some attendees took advantage of the location and enjoyed a tour of the Cincinnati Reds Stadium and a night on the Ohio River aboard the River Queen Riverboat. In addition, attendees enjoyed an evening tour of the Cincinnati Observatory. Nearly 400 Physics Education Researchers participated in the post-meeting PER Conference, that focused on research methodology and PER's role in how to approach a research study.

The AAPT Fun Run/Walk continues to be a popular event providing a break from the intense learning format of the meeting and the Speed Networking event, providing an opportunity for new physics educators to interact "one on one" with seasoned professionals, continued to grow. SM 17 registrants also enjoyed a Cincinnati Pub Crawl with colleagues.Much anticipated features of the Summer Meeting, The High School Physics Photo Contest and the Apparatus Competition are always highlights and this year they enjoyed extra attention due to their convenient location in the convention center.

The meeting included a wide variety of inspiring plenary and award talks. Monday featured the presentation of the 2017 teaching awards and the Homer L. Dodge Citations for Distinguished Service to AAPT.

The Halliday and Resnick award for Excellence in Pre-College Teaching was presented to Cindy Schwarz from Vassar College. Her talk, What Can We Do in the Subatomic Zoo?, came out of her Vassar course and book, A Tour of the Subatomic Zoo: A Guide to Particle Physics. She discussed what physics teachers can do with their students to help them learn (or relearn) about the standard particle physics model and beyond. Since the students for this course were everything but physics majors, she needed to be very creative as the course developed over the years. In this talk she discussed two parts of the course that were unique and also could be used/adapted in both high school and college settings;the final project and the debate project. Initially their final project assignment was to write a short story or poem with subatomic particles as characters. She shared some of the research presentations by her student groups, which included local business owners and residents, an environmental impact group, taxpayer lobbyists, foreign and international physicists.

The 2017 Paul W. Zitzewitz Award for Excellence in Pre-College Physics Teaching was presented to J. Mark Schober from Trinity School in New York City. His talk was Sharing Your Expertise. For many physics educators, he said, physics is only one of several subjects they teach and nearly 60% of those teaching physics have degrees in fields other than physics or physics education. Such rich academic diversity needs a vibrant professional support community that is accessible, frequent, and relevant. He shared some stories that identified and enabled AAPT members to share their expertise, expanding the Association's positive influence to the other 75% of high school physics teachers. The stakes are high —the future of science literacy, and physics' foundational role in scientific understanding, depends upon AAPT.

The Klopsteg Memorial Lecture Award was given to John C. Brown, University of Glasgow, Scotland. This award recognizes educators who have made notable and creative contributions to the teaching of physics. Brown's successful career as a solar physicist has been marked by his success at communicating science. This ability to communicate has been recognized by the Queen of the United Kingdom, appointing him in 1995 as 10th Astronomer Royal for Scotland and in 2016 as an OBE (Officer of the Most Excellent Order of the British Empire) "for services to the promotion of astronomy and science education." His talk, Black Holes and White Rabbits, discussed the nature of gravity and its extremes across the universe explaining what the term "Black Hole" means, and how and where they form. It also addressed how we detect them and demonstrated many of their weird properties and effects on their surroundings.

Kenneth Heller, University of Minnesota, received the 2017 Millikan Medal for his notable and creative contributions to the teaching of physics. His talk, Can We Get There from Here?, discussed AAPT's understanding of the goals of physics instruction and why it needs improving. Efforts within the past half century have produced multiple examples of instruction that demonstrably meet many of those goals. Those pedagogies result in educational improvement because they have a foundation anchored in modern learning theory and neuroscience, often recognized in retrospect. However, despite their proven effectiveness, these modern pedagogies have had minimal impact on physics instruction throughout the country. Too often only their surface features survive when they are adopted beyond isolated outposts on the educational map. Even when adopted with fidelity, their implementation is often snuffed out by changing personnel, constraints, or shifting instructional priorities. This talk explored the current reality and examines practical possibilities that could lead to widespread and lasting effects within the next half century.

The APS Plenary, co-sponsored by the American Physical Society Forum on Education, featured Francis Slakey from Georgetown University. His talk, The Effective Force, focused on his experiences from a decade of crisscrossing the globe and witnessing social challenges. Based on those travels, Slakey restructured his physics classes at Georgetown University to enable students to take meaningful action on social issues. One powerful lesson has emerged: a science student, inspired by a sense of social purpose, is one of the most effective forces we have to build a better world. He reviewed illustrative examples of student projects including: establishing a company that addresses invasive species, advocating to the federal government to promote pre-med "shadowing", and making a viral video to generate industry action on microfiber pollution.

The other invited plenary speaker was Julianne M. Pollard-Larkin, Assistant Professor of Medical Physics at the University of Texas, MD Anderson Cancer Center in Houston, TX. Her talk, The Future of Image-Guided Radiotherapy will be MR-Guided, presented advances in image-guided radiotherapy (IGRT) that have allowed for dose escalation and more precise radiation treatment delivery. Each decade brings new imaging technologies to help improve radiotherapy patient setup. Currently, the most frequently used method of 3D pre-treatment image verification is performed with cone-beam CT. However, more recent developments have provided radiotherapy with the ability to have on-board magnetic resonance (MR) imaging coupled to the Tele-radiotherapy unit. This latest tool for treating cancer is known as MR-guided radiotherapy (MR-gRT). Several varieties of these units have been designed and installed in centers across the globe. Their prevalence, history, advantages, and disadvantages will be discussed. Also, we will consider the possibilities of where MR-gRT might be heading in the near future.

Special events began Sunday with the evening Exhibit Hall Opening Reception and an Evening Cincinnati Observatory Tour. Monday was the High School Teachers' Day and the schedule was packed with events and sessions of particular interest to high school teachers. Also on Monday were the Solar Fest, First Timers Gathering, opening of the High School Physics Photo Contest, the Apparatus Competition in the PIRA resource room, and the Early Career Professionals Speed Networking event. Tuesday included the semi-annual Fun Run/Walk, Physics Demo Show, Night on the Ohio River on the River Queen Riverboat, and a Cincinnati Pub Crawl.With Society of Physics Students (SPS) and regular poster sessions, workshops, paper sessions, and Topical Discussions, Area Committee Meetings, and the Exhibit Hall, the 2017 Summer Meeting in Cincinnati/Covington had something of interest for everyone.