History of AAPT — Formation of AAPT

Klopsteg became interested in the problems of teaching physics while at the University of Minnesota, where he was an instructor in 1913 and was promoted to assistant professor in 1916 upon completing his Ph.D. He did not return to Minnesota after serving in the U.S. Army Ordnance Department (1917-18), but joined Leeds and Northrop Company, and then moved on to Central Scientific Company (CENCO) in 1921. He made this move largely because of the greater emphasis placed on instructional equipment at CENCO, and he remained in close contact with physics teaching. 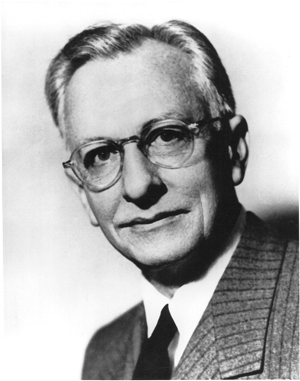 He soon became aware that others were unhappy with the lack of attention to education on the part of the American Physical Society. Klopsteg recalled informal discussions at Massachusetts Institute of Technology (MIT) during a 1928-summer institute of the Society for the Promotion of Engineering Education (SPEE)—now the American Society for Engineering Education (ASEE)—that included the directors of the institute, A.W. Duff and W.S. Franklin. (Duff was author of the physics text most widely used for many years, the Sears and Zemansky, or Halliday and Resnick of its time. Franklin was to be awarded, posthumously, the first Oersted Medal.) This institute provided an opportunity to talk with people who were engaged in teaching physics to engineers, and Klopsteg found a great unanimity of sentiment in favor of an organization whose purpose would be "the dissemination of the knowledge of physics, particularly by way of teaching."

The sales manager for CENCO, S.L. Redman, who had been a high school science teacher himself, became almost as concerned with physics teaching as Klopsteg. In travel around the country he found that W.S. Webb and M.N. States, of the University of Kentucky, were particularly sympathetic to the formation of a new society to foster teaching and communication among teachers, as they were convinced that APS would not offer the kind of forum they needed.

In April 1928 an article appeared in School Science and Mathematics 28, 345 (1928) entitled "The Plight of College Physics," and written by John O. Frayne of Antioch College. Frayne described the low level of physics teaching, especially in universities, noted the negative attitude in APS, and advocated forming a new organization devoted to the teaching of physics. Klopsteg got in touch with him, and they met in Chicago together with Glen W. Warner, editor of School Science and Mathematics. Together they compiled a list of 115 people who might be interested in a society of physics teachers. An initial vision for the AAPT can be seen to emerge from a conversation among Klopsteg, Redman, and States (Frayne had left academic life) at a meeting of APS with AAAS in Des Moines in December 1929. The three agreed to meet during 1930 and were joined at that time by Warner. Redman's chief interests lay elsewhere, but the others decided to invite 30 people, chosen from the "master list" prepared earlier, to a luncheon on December 29, 1930, during the joint APS-AAAS meeting in Cleveland. Their avowed purpose was to launch a new organization concerned with physics teaching. Warner's friend and colleague, F.T. Jones, editor of a department called "Science Questions" in School Science and Mathematics, arranged for the luncheon to be held at the Cleveland Club. 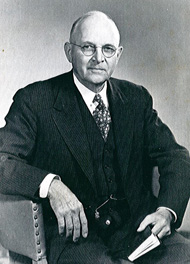 The individual they persuaded to chair the luncheon meeting was Homer L. Dodge. By this time, Dodge had moved to the University of Oklahoma and was known to have developed a particularly successful school of engineering physics there. Dodge brought practical academic leadership experience within a recently developed program and over a decade of respected physics education work within APS circles. He liked to say he "hailed from the wild west," but he actually came from northern New York, where he had become an expert at boating as a child. There is today a Homer Dodge Canoe Room at the Thousand Island Museum in Clinton, NY. [This and many other stories of this remarkable man have been told by Janet Guernsey in The Physics Teacher 17, 84 (1979).]

Of those invited to the Cleveland luncheon, eight could not attend, and one uninvited guest showed up to argue that the move was a mistake. Dodge encouraged unifying discussions regarding the relation of the proposed organization to the APS and its leaders having strong teaching commitments (like F.K. Richtmyer and Karl T. Compton). Among those who vigorously supported the formation of a new society were Dodge, Klopsteg, and Richtmyer. The decision was reached in unanimous passage of a motion made by Paul Klopsteg "that there be organized an informal association of those interested in the teaching of physics; that officers be elected who shall remain in office for one year; that a committee be established for the purpose of preparing the plans for a formal organization; that these things be done without prejudice toward any possible approach from other organizations or societies looking toward affiliation."

Officers were chosen: H.L. Dodge, President; William S. Webb, Secretary-Treasurer; and P.E. Klopsteg, Vice President. It was also agreed that a meeting be scheduled at the time of the forthcoming Washington meeting of the APS. There was more immediate work to be done, and those present decided to meet again at 9 a.m. on Wednesday, December 30, and to invite others who might be interested. The officers, Oswald H. Blackwood (University of Pittsburgh), Ralph S. Minor (University of California), B.A. Wooster (University of Alabama), and Marshall States of Kentucky composed a committee "to perfect the organization."

A preliminary constitution was adopted at the second meeting, attended by 45 people. F.K. Richtmyer attended both the luncheon and the second meeting. The future presidents of AAPT present at one or both of these initial meetings included, in addition to Dodge of the University of Oklahoma, Frederic Palmer of Haverford College, David L. Webster of Stanford University, F.K. Richtmyer of Cornell University, Lloyd W. Taylor of Oberlin College, William S. Webb of the University of Kentucky, Paul E. Klopsteg (who was at Northwestern University by the time he became President of AAPT), Marsh W. White of Pennsylvania State University, and Clarence J. Overbeck of Northwestern. Karl T. Compton attended the December 31 meeting (he became a member of the first Executive Committee) and "discussed informally the plans for the formation of the Physics Institute of America to be constituted as an association of the several societies interested in various fields of physics. He advised that this society [AAPT] should take steps to cooperate with the APS in every way possible in the formation of the Physics Institute." 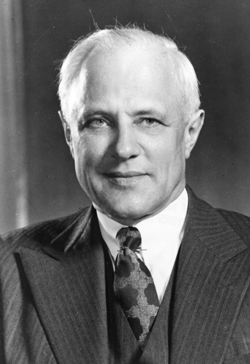 The organizing committee of AAPT must have been very busy on the 30th, for they arranged the April Washington meeting in addition to coming up with a provisional constitution. According to the minutes of the APS Council on December 31, "The Council took notice of the organization on this day in the Case School Physics Laboratory of a new society to be known as the American Association of Teachers of Physics [sic]. Homer L. Dodge was elected first President of the Society and William S. Webb the first Secretary. The Society decided to have its first meeting in Washington at the time of the Physical Society meeting, at which time they invited A.W. Hull to present an address on "The Needs of Industry in the Teaching of Physics." The Council instructed the Secretary of the Physical Society to make contacts with the new Society and to give them proper place on the first day of the Physical Society's Washington program.

At the April meeting, the address by A.W. Hull, who was director of research at the General Electric Company, was actually titled "Qualifications of a Research Physicist;" it was later published in Science 73, 623-627 (1931). It drew a large audience—other sessions were practically deserted—and a lively discussion was led by K.T. Compton.

The AAPT Executive Committee met in Washington at that time (April 29, 1931) and a dinner was combined with a business meeting of members. Affiliation with AAAS was authorized and plans were made for the first "annual meeting" in New Orleans in conjunction with the AAAS meeting there at the end of the year.