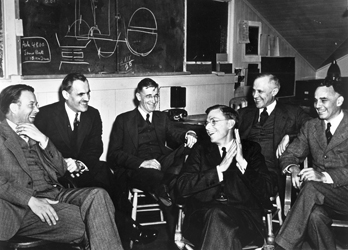 The Association was deeply involved in World War II, particularly in education and manpower. Many of its members, including several officers, went on leave from their teaching posts to work full-time for the government directly or in war research laboratories, and other activities were undertaken by the organization. A special committee of AAPT prepared for the U.S. Office of Education a report titled “Readjustments of Physics Teaching to the Needs of Wartime,” which was also printed in AJP [10, 266 (1942)]. This committee was chaired by H.M. Trytten, and included Thomas Cope (then Secretary of AAPT), Homer Dodge, K. Lark-Horowitz, and Duane Roller. The Cooperative Committee on Science Teaching prepared a report on the contributions of high school science and mathematics to the manpower problem, which was excerpted by R.J. Havighurst and K. Lark-Horowitz as “The Schools in a Physicist’s War” [AJP 11, (1943)]. Another committee, chaired by R.A. Patterson, served as an Advisory Committee for the American Institute of Physics on the training of physicists. AAPT also worked with the War Policies Committee established by AIP and chaired by Paul Klopsteg. As the war progressed, it became increasingly difficult to obtain equipment for teaching physics, and the Association, through the War Policies Committee, pressed for higher priorities for essential scientific teaching equipment.

It was clear almost from the start of the war that physics and physics teaching could never be the same again: Both would have new responsibilities in the world to come. Early in 1942, E.U. Condon was already writing “A Physicist’s Peace” [AJP 10, 96 (1942)]. The Oersted Response of G.W. Stewart in January 1943, titled “Teaching of Tomorrow,” anticipated postwar changes and stressed the necessity of making physics teaching even more useful to society. Vern O. Knudsen, one of the founders of the Acoustical Society, charged in “The Physicist in the New World ” [AJP 11, 74 (1943)] that we have trained too few students “to take important responsibilities in the practical world, and certainly too few to be independent scholars, thoroughly trained in fundamental and applied physics.” The emphasis was dual: The education of professional scientists must be broadened, and science education must include the study of the relations of science to other human activities. Side by side with the strengthening of the curriculum within the discipline of physics was an upsurge of interest in the role of physics in general education.