The Association was much involved in the early efforts to support institutes for the continuing education of teachers, and J.W. Buchta of the University of Minnesota was among the prime movers. From the beginning of his professional career, Buchta had enjoyed visiting and lecturing at high schools, and in 1939 he initiated a very popular series of lectures for students and their teachers, usually given on Saturdays at the university.

Institutes for summer study were given at Union College in Schenectady and at the Case Institute of Technology in Cleveland with support from the General Electric Company, and in 1951 there were proposals to extend such offerings to other locations. In 1952 the University of Minnesota held its first summer institute for high school teachers of physics, chemistry, and mathematics, with support from the Ford Foundation. Funds from NSF became available for the purpose in 1953. As shortages in adequately trained scientific and technical personnel became increasingly evident and a need for wider public knowledge of science was recognized, the NSF Institute program was enlarged. The first full-length Academic Year Institutes were held in 1956-57, and the number of summer institutes was gradually increased. During the year 1958-59, J.W. Buchta, on leave from the University of Minnesota, served as head of the institute section of NSF.

Institutes for the continuing education of high school science teachers began to decline in number in the late 1960s, when the shortages of technical personnel, and in fact of science teachers, began to decline. After a leveling period during the 1970s, support for teacher institutes was discontinued in 1982. This condition was quite short-lived, as the outcry from the science community coincided with several reports ("A Nation at Risk,"  D. Ed., "A Developing Crisis," AAAS, "Action for Excellence," Education Committee for the States, and "Educating Americans for the 21st Century," National Science Board Commission) detailing the severe problems facing science teaching and with growing recognition of the shortage of qualified science teachers. Support for the teacher institute programs was resumed the following year.

AAPT established a teacher recognition program for high school teachers of physics. Jay Buchta got this project under way in 1962, the same year that he retired from the University of Minnesota and began to work full time for the Association. Recognition of candidates depended upon their achievement on an examination prepared in cooperation with the Educational Testing Service. Financial support came as a grant from The Carnegie Foundation, and publicity was given to the successful candidates in The Physics Teacher and in press releases to be used locally. This format was maintained for five years, but the project was allowed to lapse after Buchta's death. A new type of program announced in 1969 continued to recognize individual teachers, but recognition was based on their innovations in teaching physics instead of their superior subject matter competence. Just as in the awards for high school programs mentioned earlier, AAPT representatives visited  the schools for a final judging on the basis of a teacher’s paper describing some change or changes that had improved the physics offerings. The prizes were in the form of cash awards to the teachers themselves. The High School Awards Program changed in 1974: Teachers could compete for small grants to support the operation of "innovative physics teaching programs or activities that seek to increase student enrollment, or enhance student achievement in physics." The Carnegie Foundation grant expired and the program is now supported by the Association and administered by the High School Committee and the Executive Office.

Stimulated by a suggestion from Judy Franz (then at Indiana University), the chair of the APS Education Committee, AAPT obtained a grant of $20,000 to convene a conference of individuals with extensive experience in operating teacher institutes and workshops. The intent of the workshop, held in April of 1984, was to produce a document distilling the collective wisdom and experiences of the group, which included James Rutherford of the Harvard Project Physics, Uri Haber-Schaim of PSSC and 109 other well-known professors and teachers of physics. The resulting Proceedings of the Conference on Teacher Institutes and Workshops, edited by Peter Lindenfeld (Rutgers) and Jack Wilson (AAPT and Maryland), were published by AAPT in 1985 and remain the best source of information about institutes for physics teachers.

In response to the worsening situation in physics teaching, the Executive Board created a Crisis Committee that began to consider possible responses. Rather than add to the proliferation of unread reports, the committee proposed taking direct action. They first conducted an evaluation of the many proposed “solutions” to the crisis that had emerged from various sources. The highest-ranking proposals turned out to be those that involved teacher workshops. Curriculum reform was viewed as less important. The Crisis Committee spun off a committee to develop a "Resource Kit for the New Physics Teacher." This was designed to be given to the many underprepared teachers being pressed into service to teach physics for the first time.

After an initial NSF proposal was rejected, Jack Wilson asked Don Kirwan to develop a proposal more in tune with the "solutions" and goals of the Committee. Don Kirwan (University of Rhode Island) then conceived and developed, with assistance from John Layman (University of Maryland), the proposal "Development of Physics Teaching Resource Agents (PTRAs)." Three NSF grants totaling nearly $1.5 million enabled AAPT to prepare more than 400 outstanding high school physics teachers as PTRAs. (The duration of the grant was from June 1985 to October 1989.) These teachers benefited from preparation in laboratory work, lecture demonstrations, media, computers, research in science education, current physics research topics, and organizational and leadership skills. PTRAs in turn conducted workshops in their own school districts and worked with high school, junior high, and elementary teachers. The PTRAs reached thousands of other teachers through these regional workshop programs. The AAPT has closely monitored the project, which has provided a model that other areas of science have adopted to improve the quality of science teaching.

In 1992 AAPT received funding from the National Science Foundation (NSF) for the PTRA-PLUS program. This was an extension of the very successful Physics Teaching Resource Agents (PTRA) program described earlier as a contribution to teacher education. In 1997, the program was further modified when NSF awarded AAPT a five-year grant totaling almost $3 million to extend the program to urban regions of the United States. James H. Nelson of Seminole County (Florida) Public Schools and Lawrence J. Badar of Case Western Reserve University, both former high school teachers, and Robert Beck Clark of Texas A&M University have served as leaders of the program. The Urban PTRA program has extended PTRAs to more teachers and developed more workshop material in 25 urban districts, including Houston, Cleveland, Brooklyn (New York), San Francisco, and Washington, D.C. In 2002, NSF approved another five-year grant for almost $6 million to expand the PTRA program to rural centers. 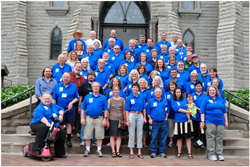 James Nelson, Lawrence Badar, George Amann, Karen Jo Matsler, Jan Mader, and Robert Beck Clark (with others) have served as leaders of the several variations and extensions of this exemplary program over more than 25 years. PTRA has become known as a leading provider of accessible, high-quality in-service programs in physics and physical science for pre-college teachers. In 2011, the APS Excellence in Physics Education Award was given to leaders of the PTRA leadership team. This award "recognizes and honors a team or group of individuals (such as a collaboration), or exceptionally a single individual, who have exhibited a sustained commitment to excellence in physics education."

In a 8/1/2000 response to data showing a growing crisis in the shortage of qualified high school physics teachers, a cooperative effort from APS, AAPT, and AIP initiated broad NSF support for PhysTEC (Physics Teacher Education Coalition) - PI: Fredrick Stein, APS; Co-Principal Investigators: Jack Hehn (AIP), John Layman (AAPT). Its continuing mission has been "to improve and promote the education of future physics teachers." PhysTEC endeavors to help physics departments and their faculty members work closely with education department colleagues while taking a more active role in improving the pre-service training of physics teachers. As noted, this project has seen major support from NSF (awards starting in 2000, 2001, and 2009); the Fund for the Improvement of Postsecondary Education (FIPSE); and APS. It provided a formal mechanism for professional societies to launch a national effort to improve physics/physical science teaching in the United States by forming a national coalition of committed physics departments. The PhysTEC program focuses at the pre-service level while seeking to also address the induction and mentoring phase of the new teachers' careers.

After its first 12 years, PhysTEC is now identified as a partnership between APS and AAPT. The goals currently described on the PhysTEC web site include: (1) transform physics departments to engage in preparing physics teachers, (2) demonstrate successful models for increasing the numbers of highly qualified teachers of physics, and (3) spread best practice ideas throughout the physics teacher preparation community. The project includes two sets of institutions: (1) PhysTEC Supported Sites and (2) the broader Physics Teacher Education Coalition (numbering about 300 institutions).